Today we left Barnaul feeling a bit hungover heading for Novosibirsk about 300km away, the road between the 2 city’s is pretty boring long and straight with very little to see apart from trees, it’s a tough on an endure bike with a terrible saddle. About an hour from Novosibirsk Kev’s bike started missing and back firing and generally losing power until it came to a complete stop, we changed the fuel filter inside the rear tank which was in a bad way, it was black and thick sludge dripped out of it when it was removed. Hoping this was the problem we put his bike back together and attempted to fire it up, no change 🙁 it was still farting and stalling.
Whilst working on the bike a lorry driver pulled up who was also a biker and although he was working spent an hour and half with us sorted out a recovery truck and garage before he left, yet another great helpful Russian he also knew the barman at the Barnaul bikers club we spent all night in. 2 hours later Anton pulled up in his Lexus jeep with trailer to collect us and it took a further 1.5 hours to get back to his garage where we met Tanya one of Anton’s co-workers. 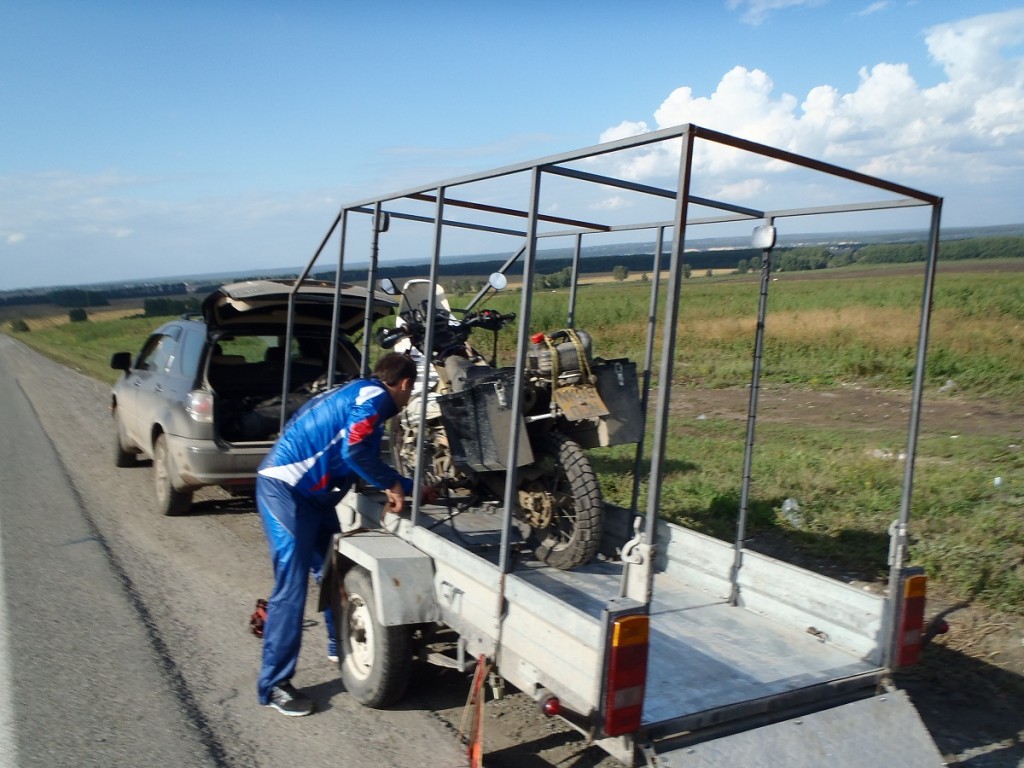 Kev’s bike on the trailer to Novosibirsk.

Tanya gave us coffee and our own office while she arranged for us to stay with one of her friends Yuri, then  Anton drove us all to Yuri’s flat and on the way picked up Tanya’s friend who spoke very good English. We arrived at Yuri’s, had a shower while the girls went to the shop to buy food to make us a lovely meal and the 6 of us sat eating and drinking vodka till the small hours. It was a great night with genuine, generous, nice people but we are going to pay for it tomorrow with our sore heads again!