On arriving at the hunters lodge we found a drunk Russian in residence which obviously messed with our plans a bit but we were wet and cold, he invited us in offered us tea and seemed OK but we soon realized he was a bit mad! He was trying to tell us about the Russian Afgan war and that he was in the 4th Battalion then started doing machine gun and throat cutting gestures to us. We didn’t fancy sleeping in the same room as him so tried to explain that we wanted to sleep in an old Banya across the dirt road. He wouldn’t take no for an answer and kept trying to get us to sleep in the hut with him, after an hour of going around in circles we decided it was time to leave and look elsewhere. Whilst packing up I looked over to Kev who was nearest the hut and saw that the nutter had followed us out a couple of minutes later with a shotgun! Shit this wasn’t good, he was standing there waving it around and shouting in a drunken slur, then BANG! he lets a round off near Kev’s bike. At this point we both thought are time was up, but as Kev is a bigger target and was nearer to him than me I still stood a chance to escape 🙂 . So in that split second after the shot was fired we jumped him, killed him with bare hands and buried him in the forest! (Kidding). We actually tried to pacify him but it’s very difficult when you don’t speak drunken Russian, eventually he calmed down and let another round off at a fence panel showing us they were blanks. They were probably used to frighten bears away, but it didn’t matter we were off before he could reload with real cartridges! So now it was 9.30pm raining, cold and getting dark and we were riding the “Road of Bones” how romantic 🙂 . I had no sleep mat or bag and a tent with a fly sheet that only covered half the back and we’re heading further into the wilderness and this is only the second day of travel!. 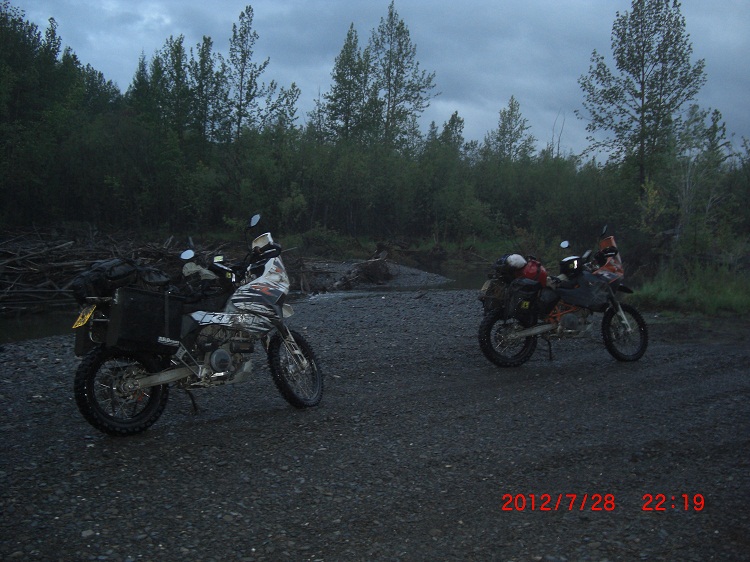 We rode for a couple of hours away from the nutter got in well off the road and built a nice big fire and made camp. 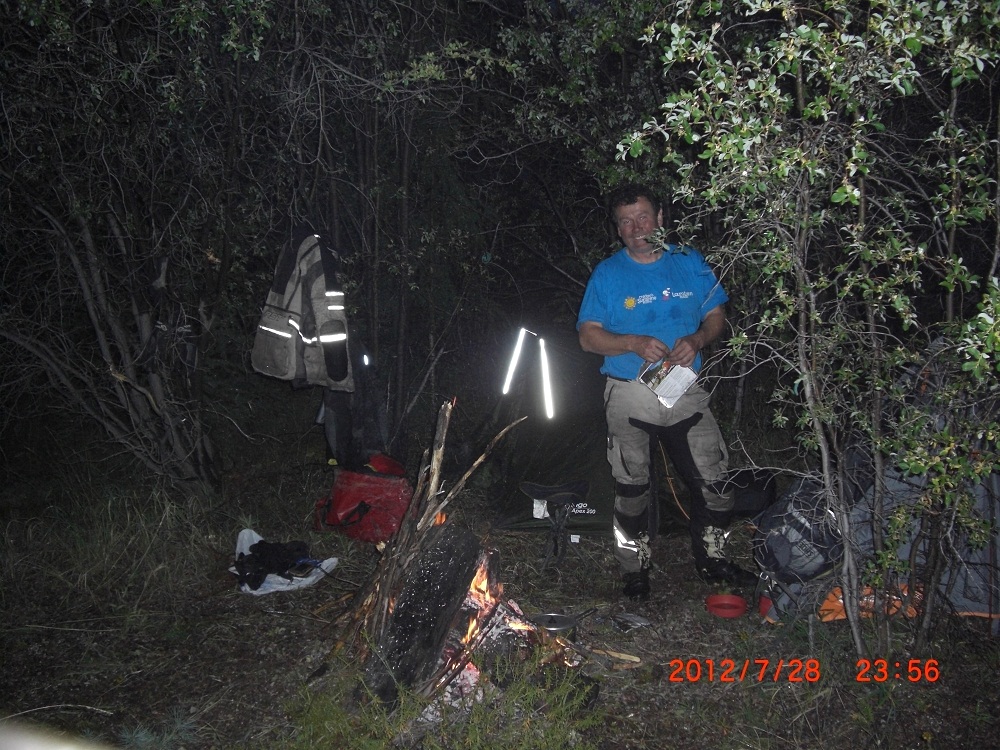 Camping on the road of bones.

The rain had stopped so we sat and ate another freeze dried meal and talked about what we should have done in the little situation earlier!