This part of the BAM is relentlessly tough, not from a skill point of view but just getting beaten about by the rocks and potholes the whole way. 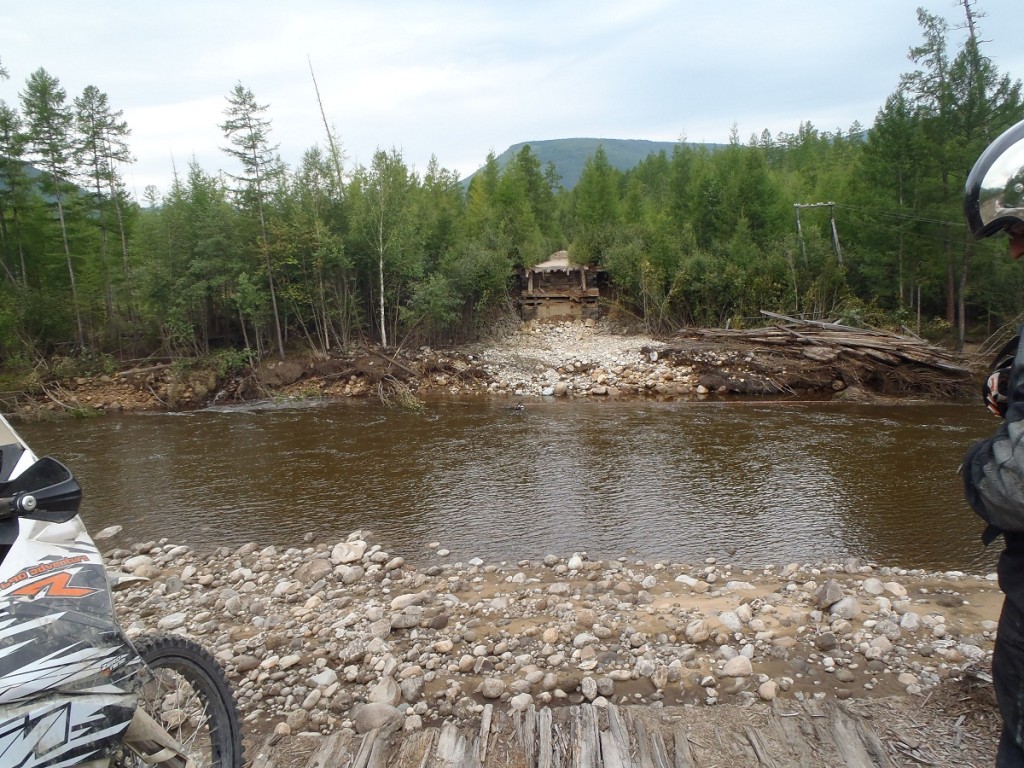 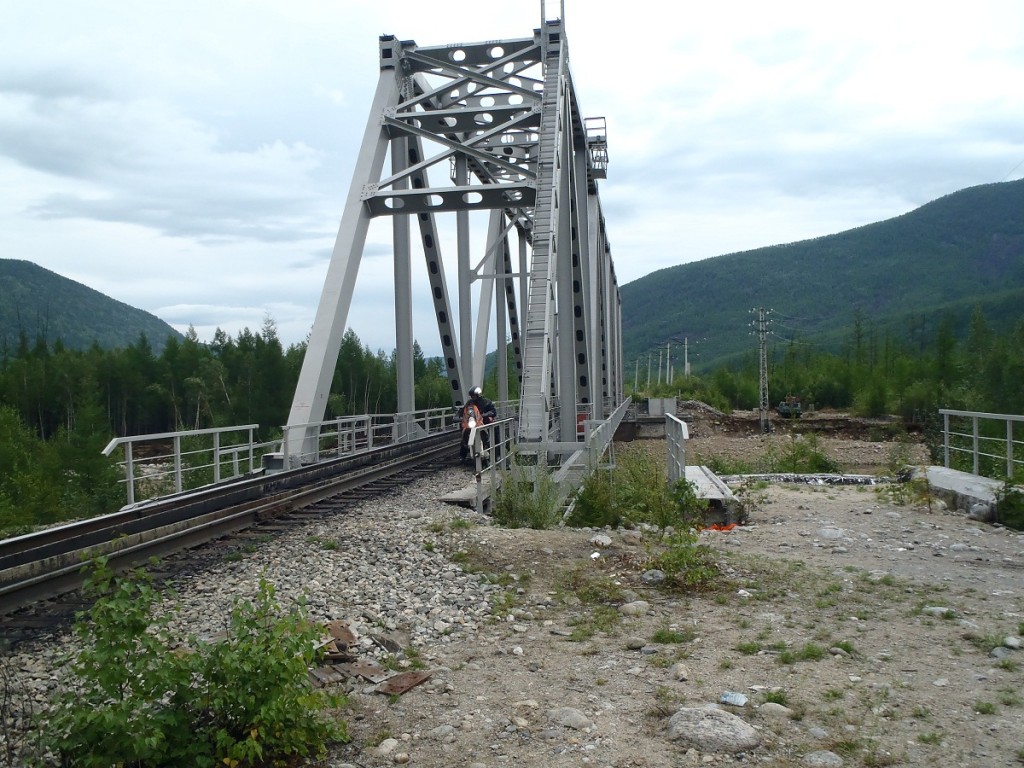 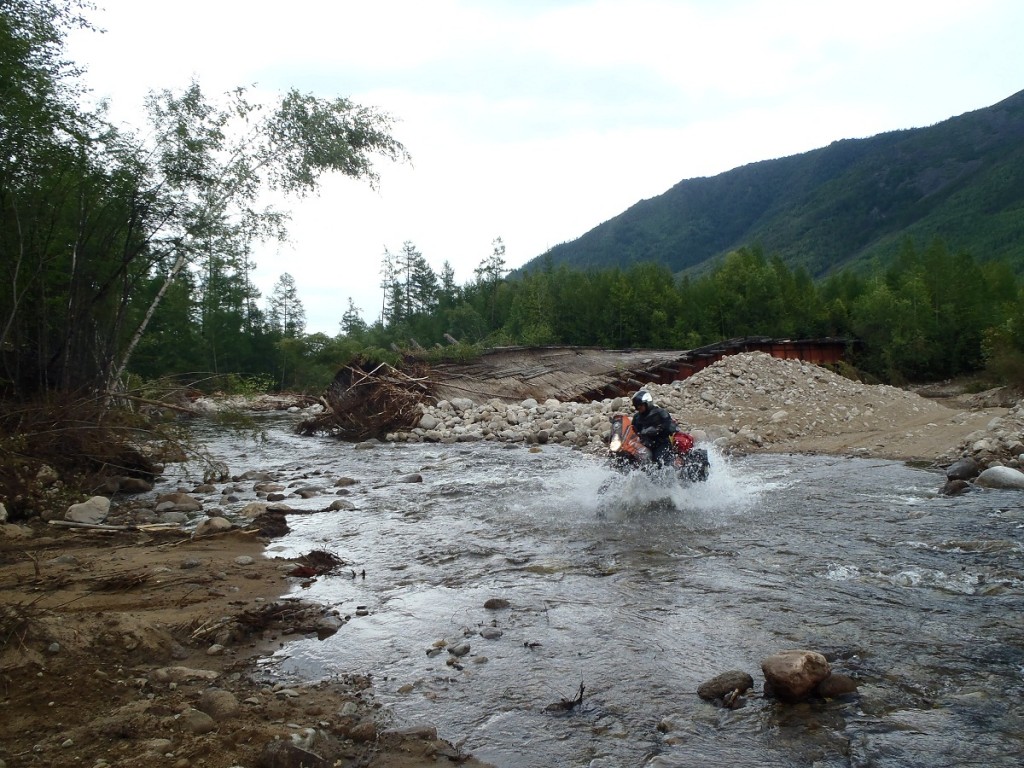 We made it to another village/town headed for the shop to stock up with some supplies of bread, jam, crisps, and chocloate (basically anything we could recognize as food and could carry). Coming out of the shop we were greeted by a railway worker on an old MZ type bike, so asked if he knew where we could purchase some fuel. He’s drinking a can of beer and it’s only about 11am, tells us to follow him and shoots off like a maniac across town!. 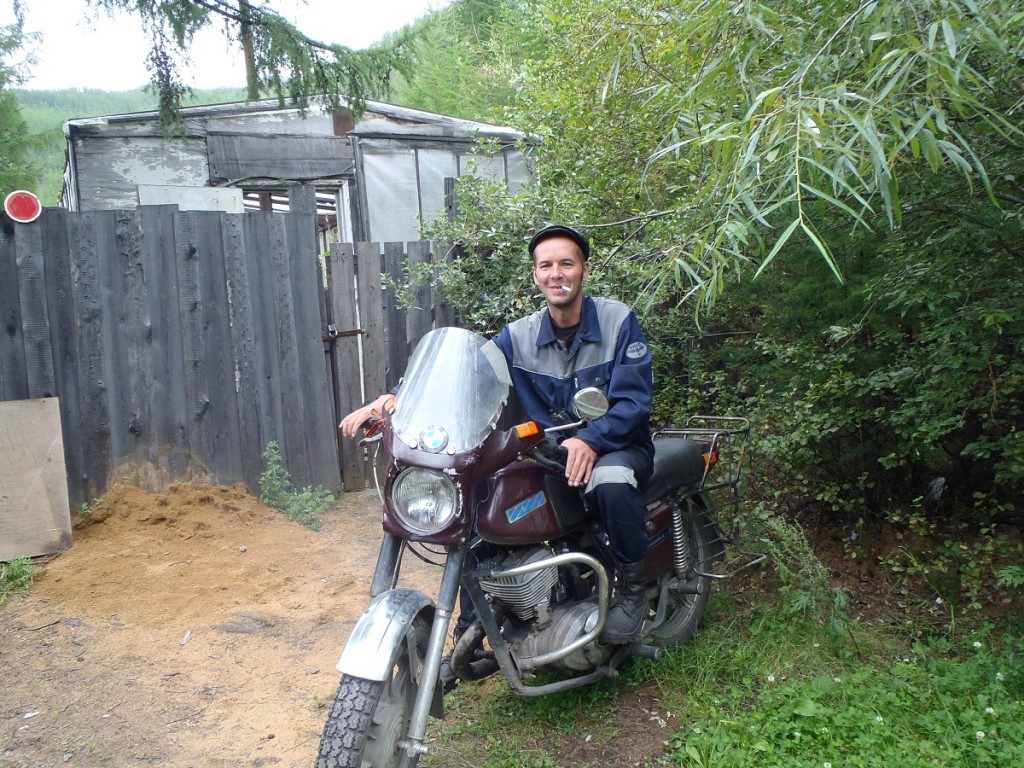 We top off our tanks with 80 octane fuel, have a basic chat with the guy about bikes and then head off towards Chara via more bridges, rivers, and crappy tracks. 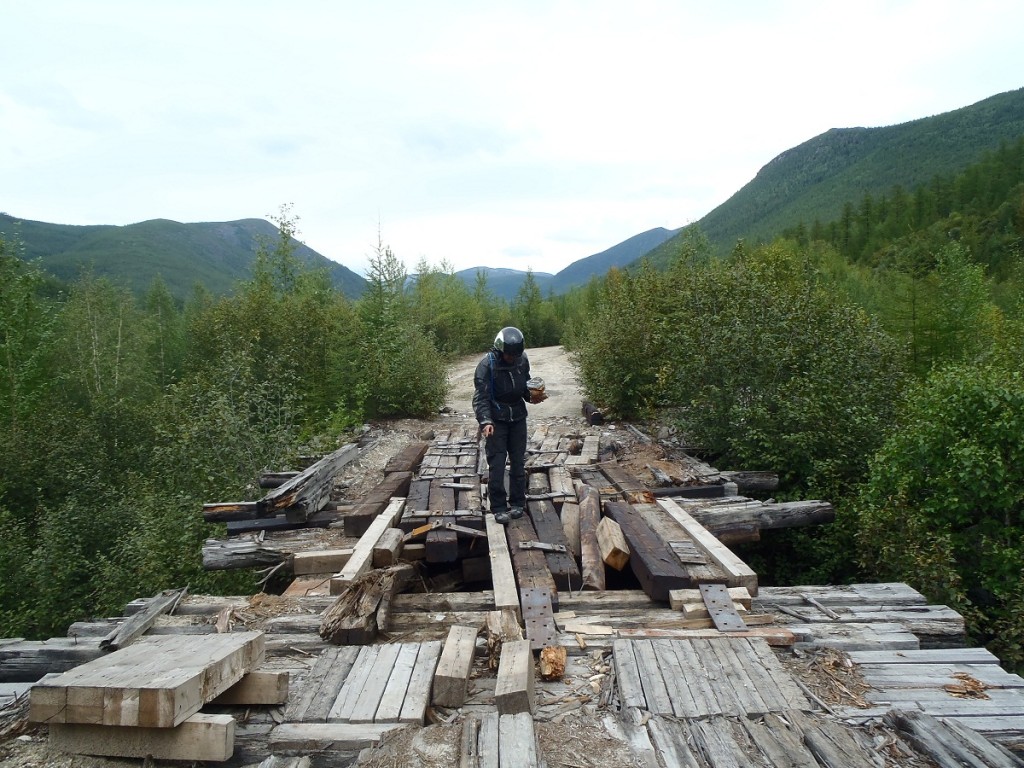 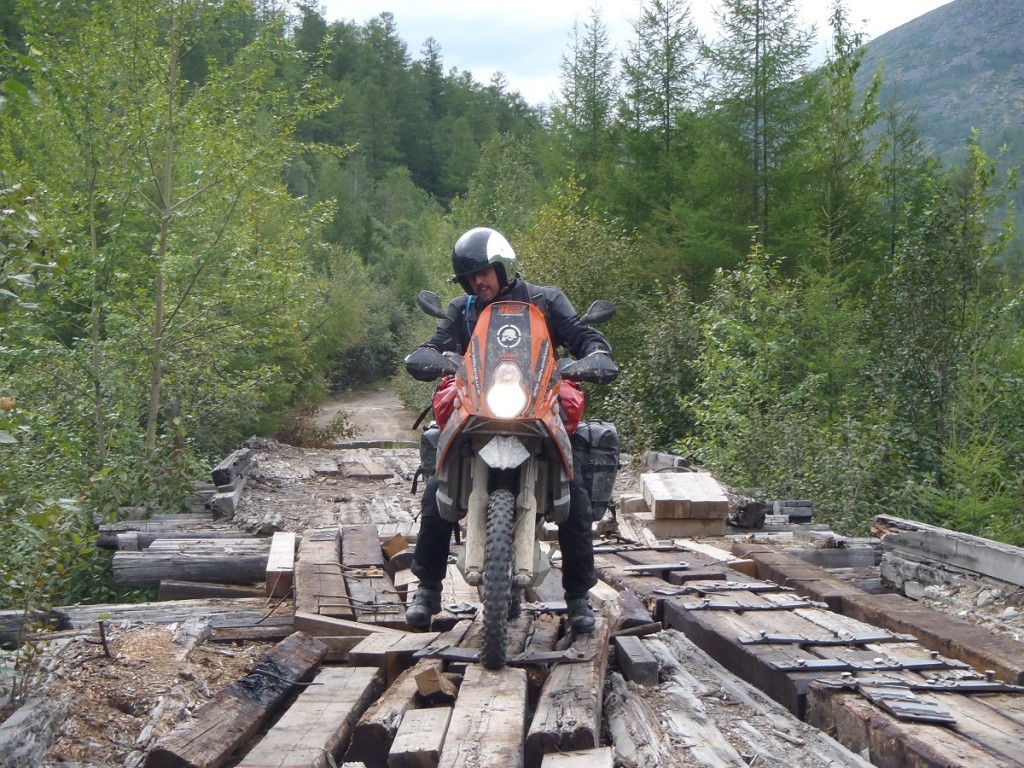 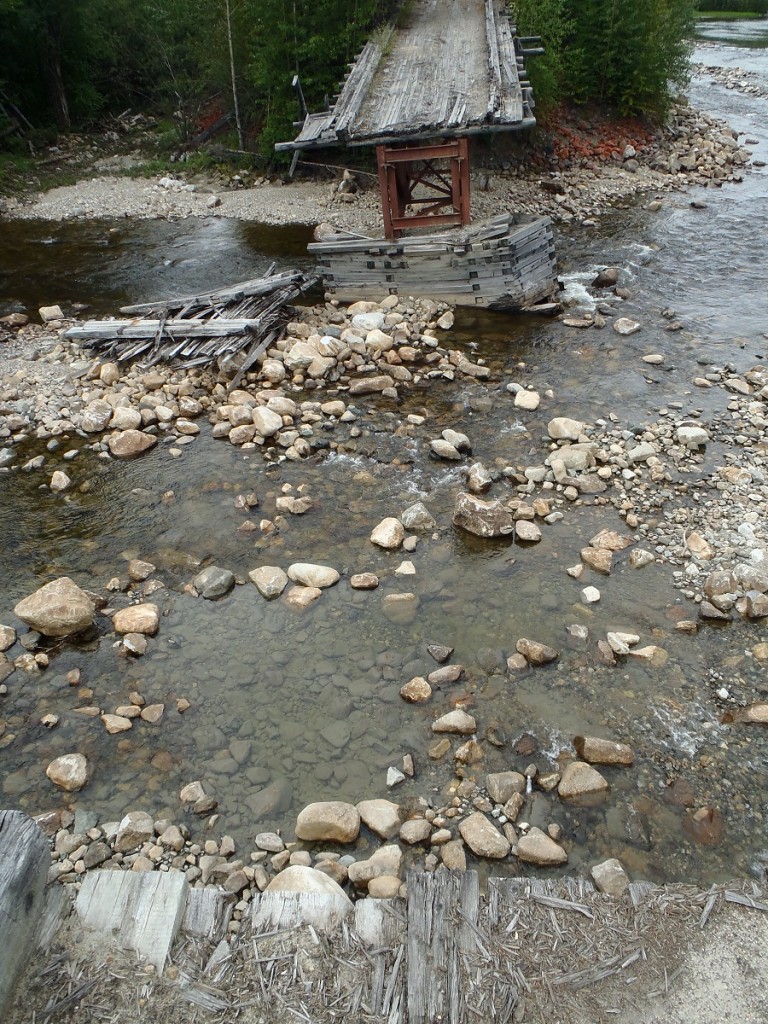 Next obstacle was another missing bridge with no railway bridge nearby to cross over. So Kev decides to backtrack to a turn off where the trucks use to cross the river. Being a good viewing point to take a couple of pictures I decided to stay on the end of the bridge. 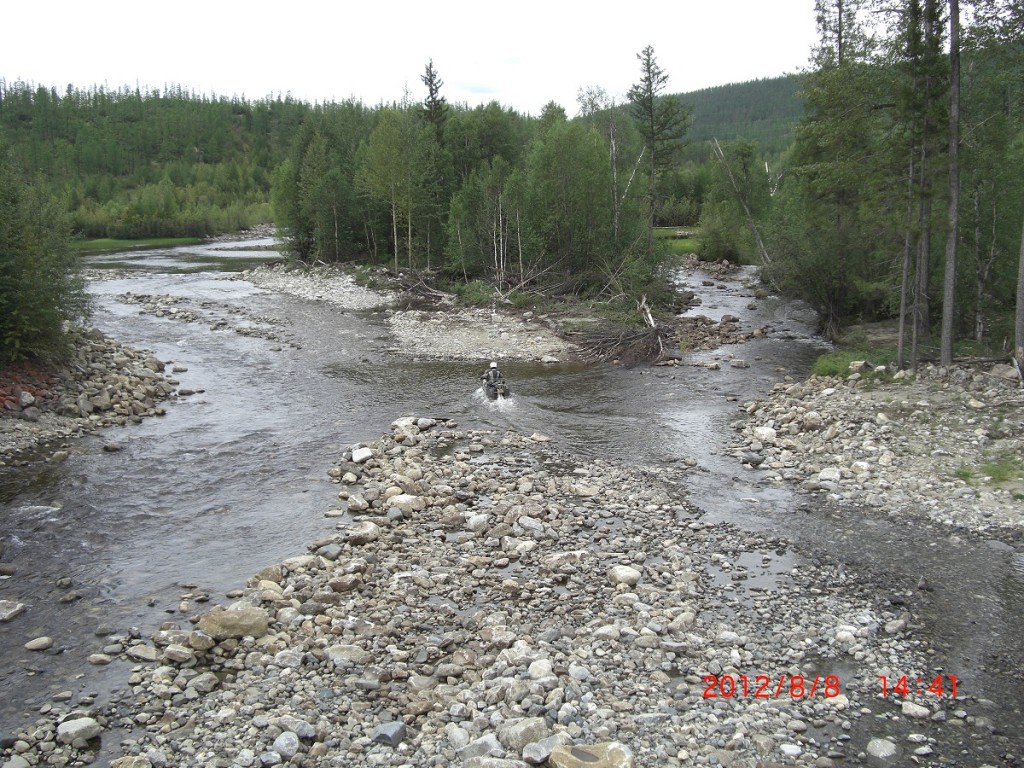 On the last part of the crossing Kev’s bike became stuck between boulders and over knee deep he almost drops it, holding on and stuck he can’t reverse out. I jumped on my bike and rode across to the island where I could park it up to go help him, both manage to pull his bike out ready for another attempt. We are lucky that these rivers are low at the moment but they are still running very fast and the boulders are a nightmare for riding across. After a rest Kev gets his bike across, next was my turn and I wasn’t looking forward to it! My strategy is fast and hold on for dear life 🙂 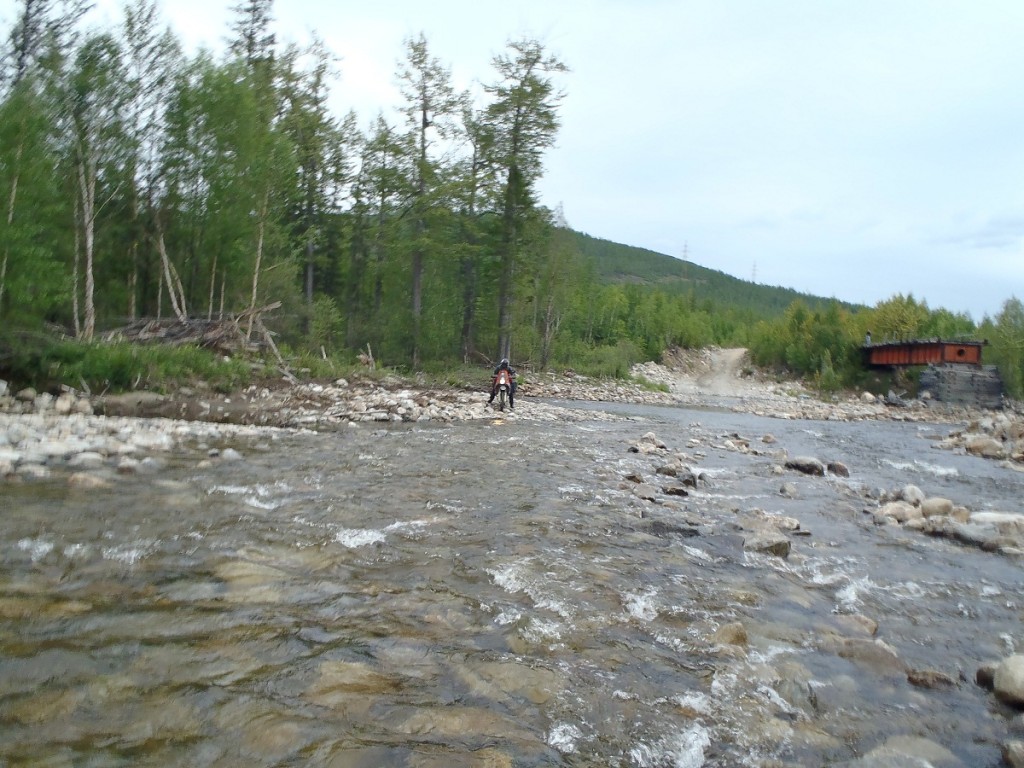 During all the drama some bridge workers appeared at the opposite bank watching and pointing us to the best path across the last and deepest part of the river. Once we had made it they invited us up to their campsit for a cup of tea, this gave us time to drain our boots and socks of water. 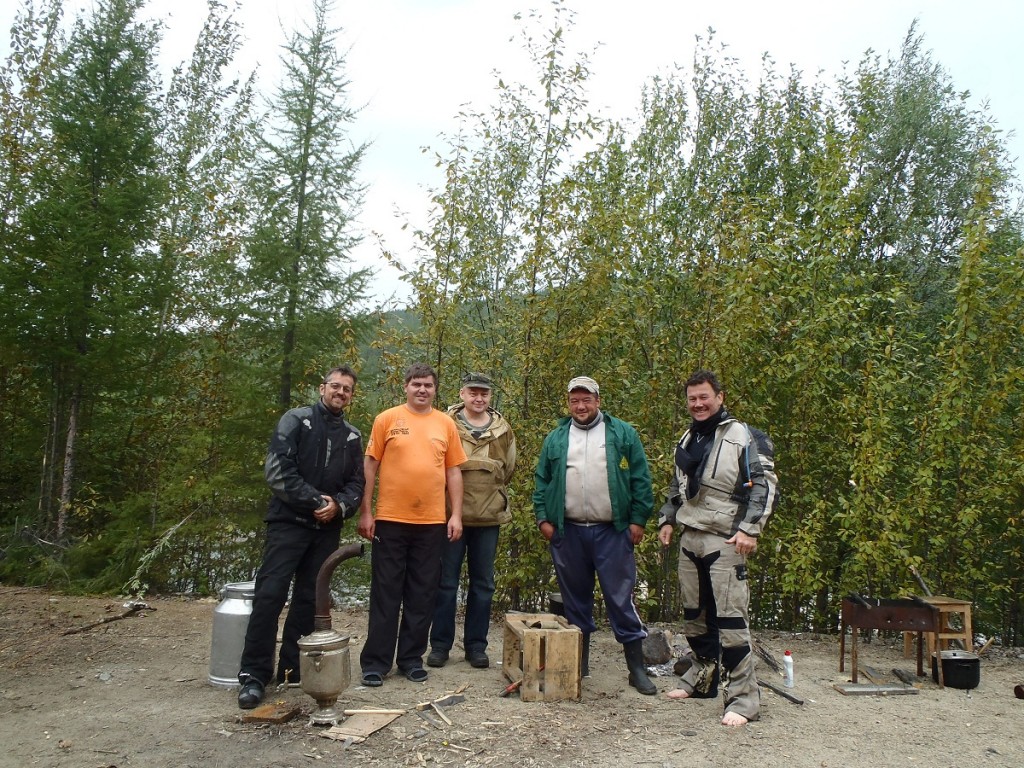 Whilst drinking a cuppa sitting on the side of the broken bridge one of the 4 wheel drive Russian vans attempts to cross the river, we sat and watched as he unfortunately took the wrong path and became stuck. No problem the bridge workers call in the big guns and tow him out! even the locals get stuck 🙂 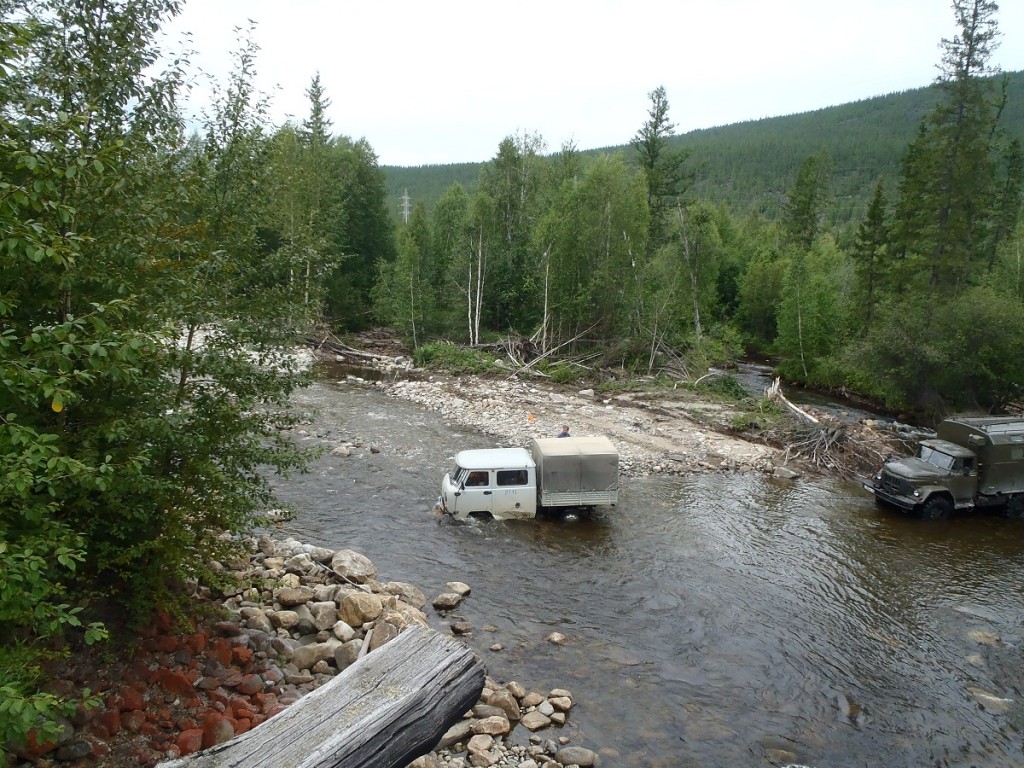 Back on the “road” to Chara and the surface improved, we were getting higher in alltitude and the landscape was becoming more open which gave some great views. 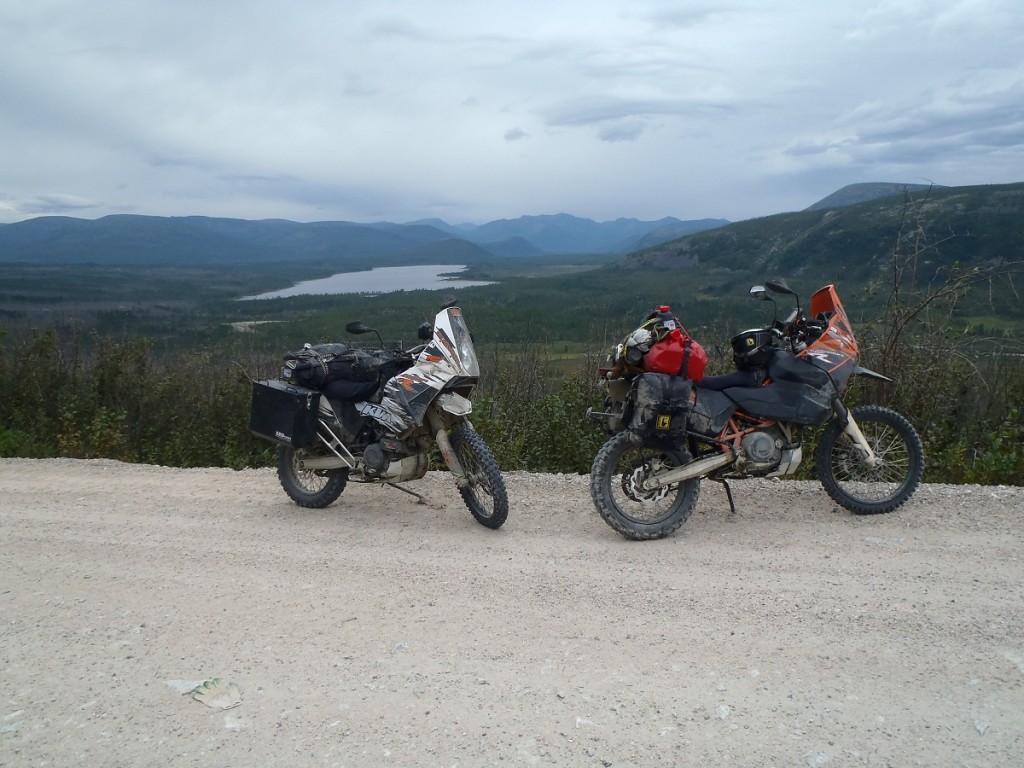 BAM road bike on the way to Chara.

On this fantastic bit of road Kev pulls up suddenly, we stop and he points out some reindeer and a tent shaped like a teepee. Amazingly we see a family emerge. The children wouldn’t come to see us but the father walked over, I assume these are indigenous people of the area, there must have been 15 to 20 reindeer and 3 children. What a tough life that must be! 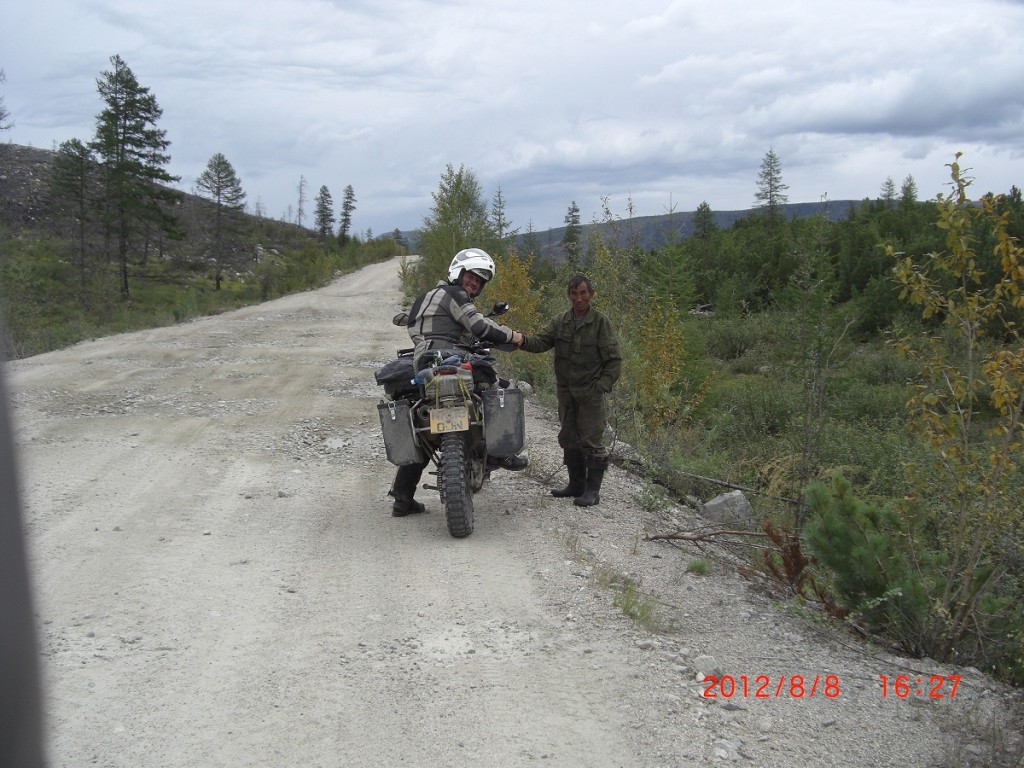 Reindeer herder on the BAM. 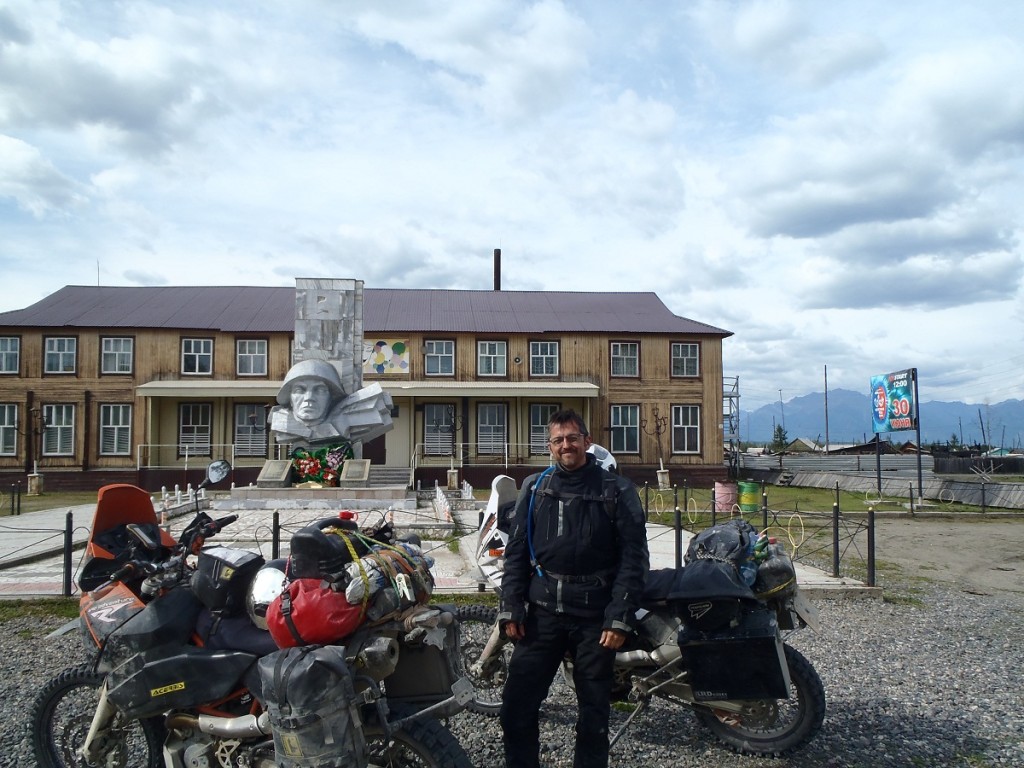 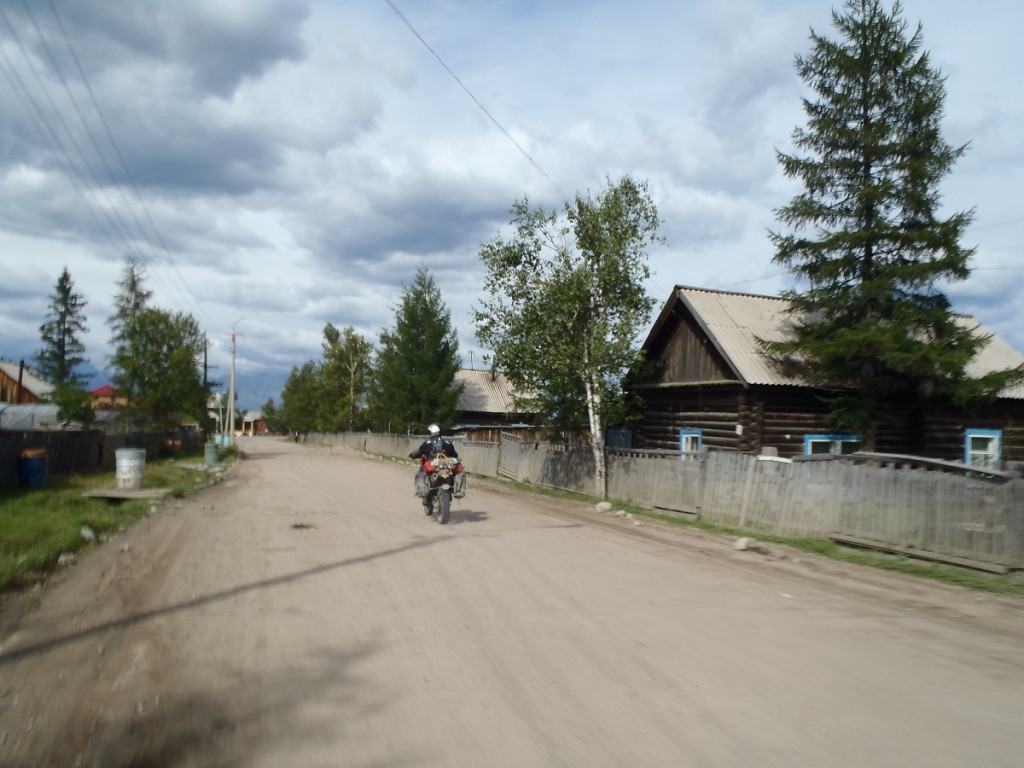 Not even sure how many miles we did today but made it to Chara where there is a hotel which was great for us after 2 nights in railway huts stinking of smoke from the fires. So we booked into the hotel, paid up and was show our room by the lady. Unknown to us we were actually sharing it with a young Russian fella called Bogdan! So Bogdan sitting there playing a game on his phone and drinking 1lt cans of baltica 7 (beer) chain smoking, bloody great this is going to be a fun packed night, Kev went for a shower whilst I sat on my bed looking over the gps and cross referencing it with a map. Bogdan finishes his game and comes over to see what where we had been and were going, he offered a beer which I passed on as needed a shower and something to eat. After we were cleaned up we popped out to the shop next door to buy some food and beers for the evening, back in the room we offered Bogdan a beer and sat around showing him pictures and our adventure. One thing let to another and we find out that he is waiting for a 2am train to take him home where his girlfriend has just given birth to a baby boy! Next he has gone to the shop and purchased two bottles of Russian champagne, some women from next door appear and it was party time. Poor bugger just had a baby and has to spend the night with 2 English fellas that can only say please and thank you in Russian. Just another random night on the adventure. 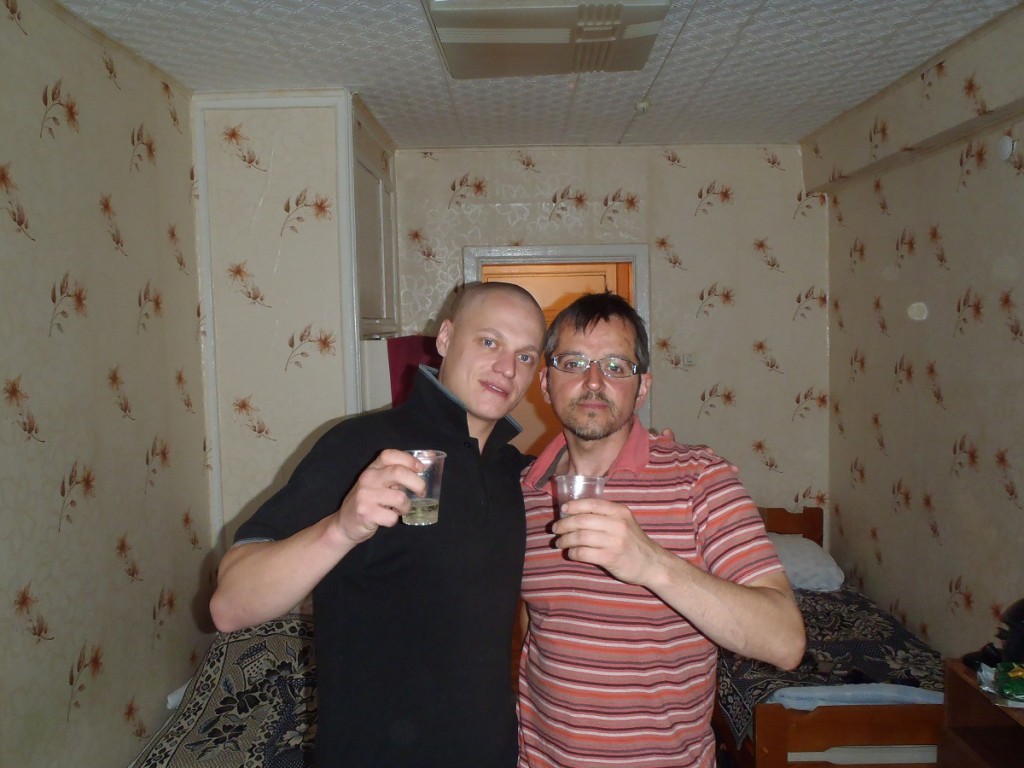