This morning after our pasta in creamy sauce breakfast with a cuppa sitting on our camping stools, we sat taking in the view and the roar of the river. The weather was perfect but the only thing that spoils Siberia are the mosquitoes, they relentless in their pursuit of human blood. 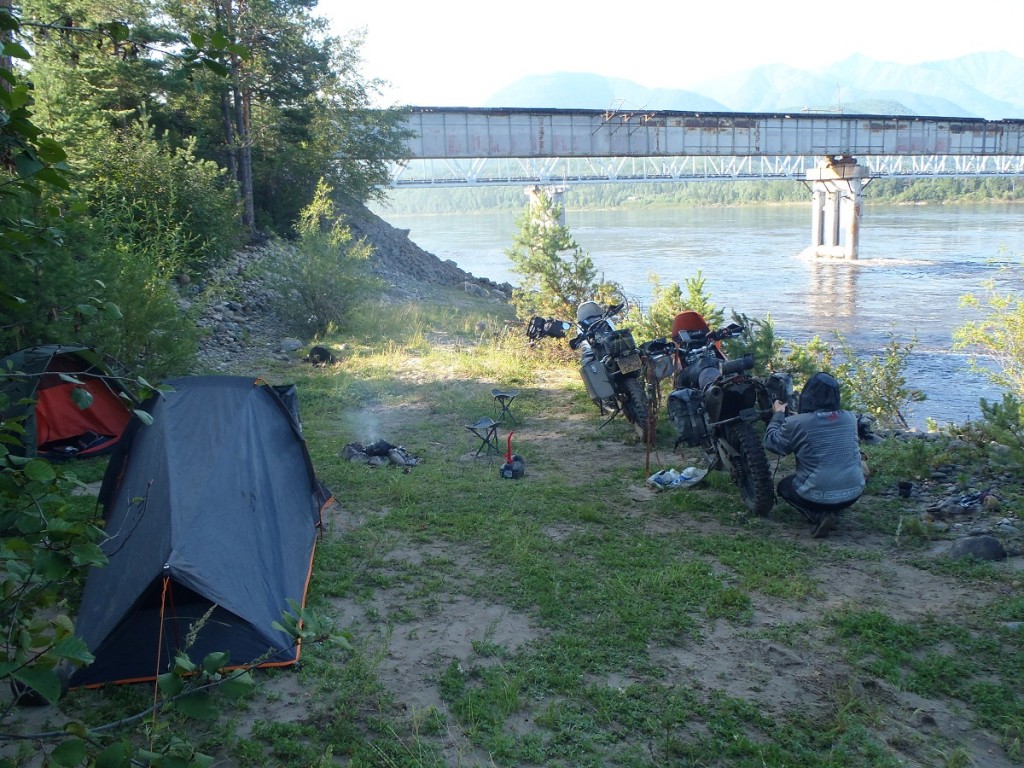 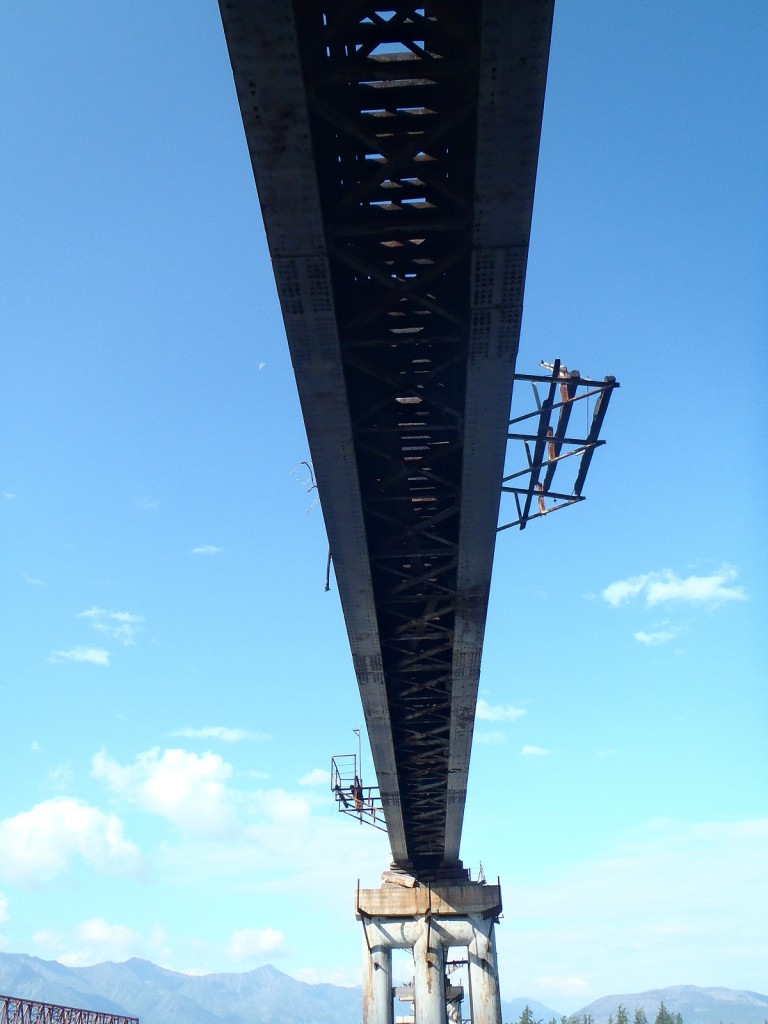 Once everything was packed up and ready to go we headed up to the bridge for our crossing, this bridge is about 600 mtrs long by 15 mtrs high and only a couple of mtrs wide with no rails!. It’s made up of railway sleepers cross ways with gaps in and some have large plates bolting them together so a bouncy ride. Strangely I wasn’t that worried about it even though I don’t like heights, Kev on the other hand was a bit more nervous so I let him go first just in case he fell off the side 🙂 . Roughly in the middle there is a big raised metal platform which you bump over which adds to the excitement!

Kev set off at not a bad pace while I waited to get a bit of distance behind him, it took over 2 mins to do the 600 meter crossing which had been reportedly done by the Spanish chap in 40 seconds a week or so ago. He must have been hammering that fully loaded 990! probably took off over the metal plate and landed on the other bank 🙂 Shame we missed bumping into him on the journey. 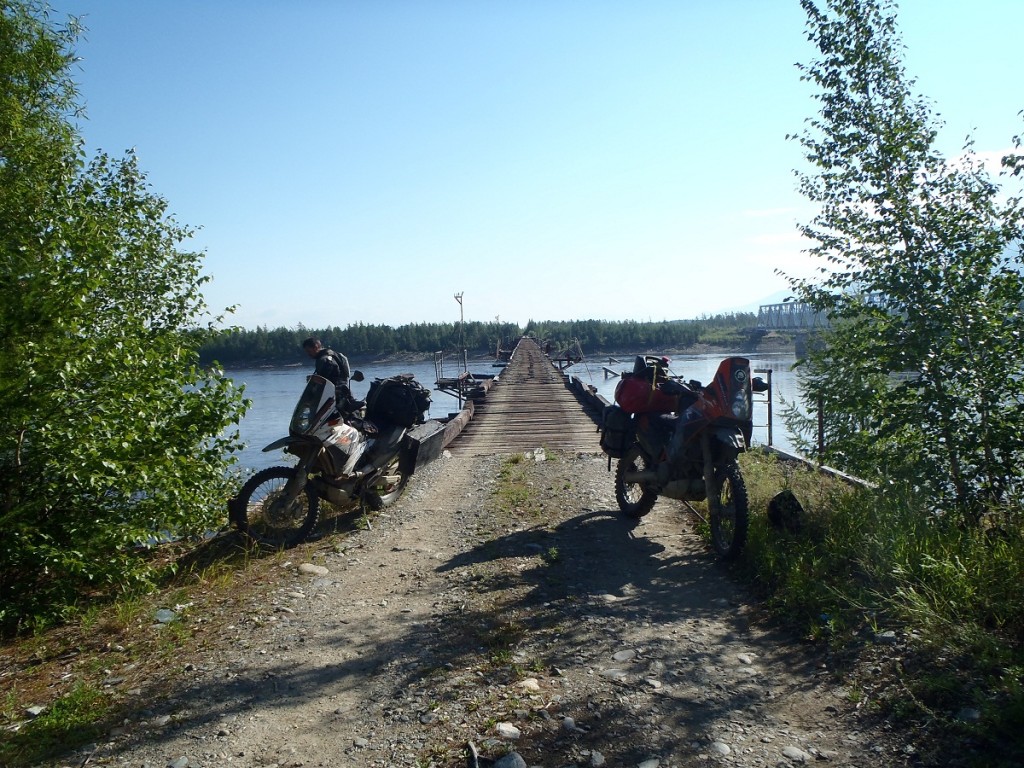 After the Vitim bridge crossing.

After a couple of photos and to mop the sweat from our brows we were again off on the road and next stop Taksimo. The road is getting better this side of the bridge, although it’s still not M1 standard and with some large puddles thrown in for go measure. 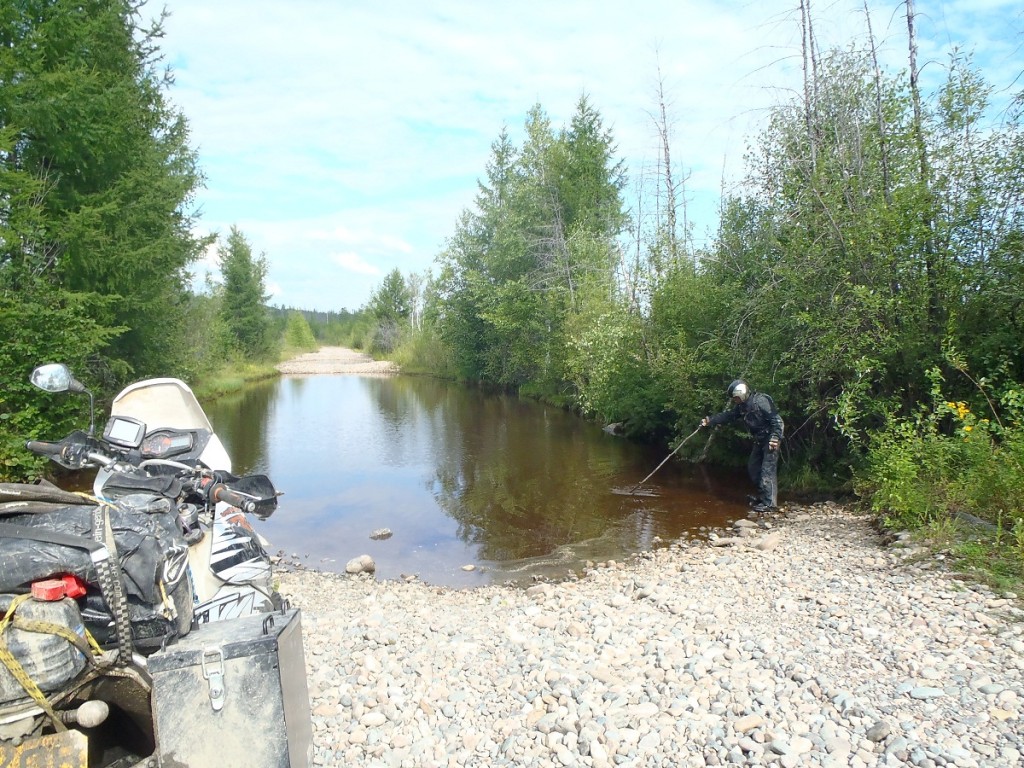 Just before crossing the Vitim this morning we met a family from St Petersburg who were travelling in a Nissan Patrol to see if they could reach Tynda. The guy spoke good English and informed us that they had heard of a jeep that crossed the Kuanda river railway bridge without asking the guard and had become stuck on the rails at the other end. Apparently it had almost ended in tears with a train coming but they managed to get the jeep off the track in time, the guard had reported them to the police and they had been turned back soon after. Anyway along we went on the road only to come up against a freshly made blockade right across the road, hmmm maybe this had been done to stop travellers. 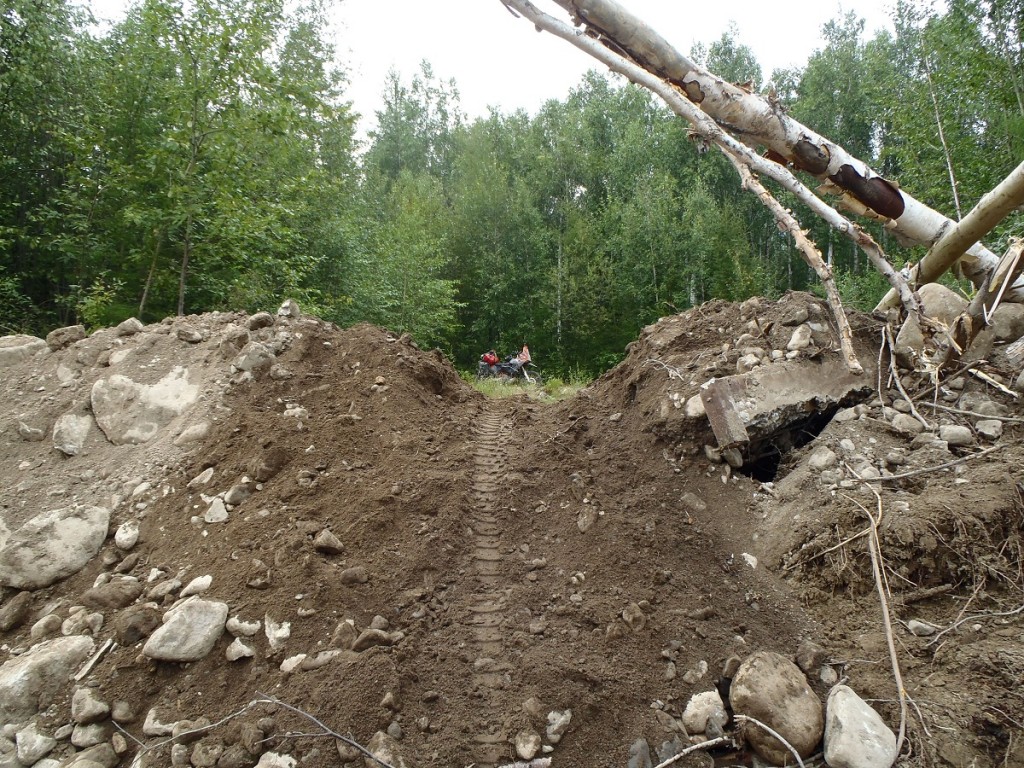 So after riding up and down the road to see if we could bump up over the railway and finding nothing we stopped and made a path through. Back on track after a hour delay we arrived at Taksimo which felt like civilisation with shops, cafes, and several fuel stations. This is when we felt that we had made it 🙂 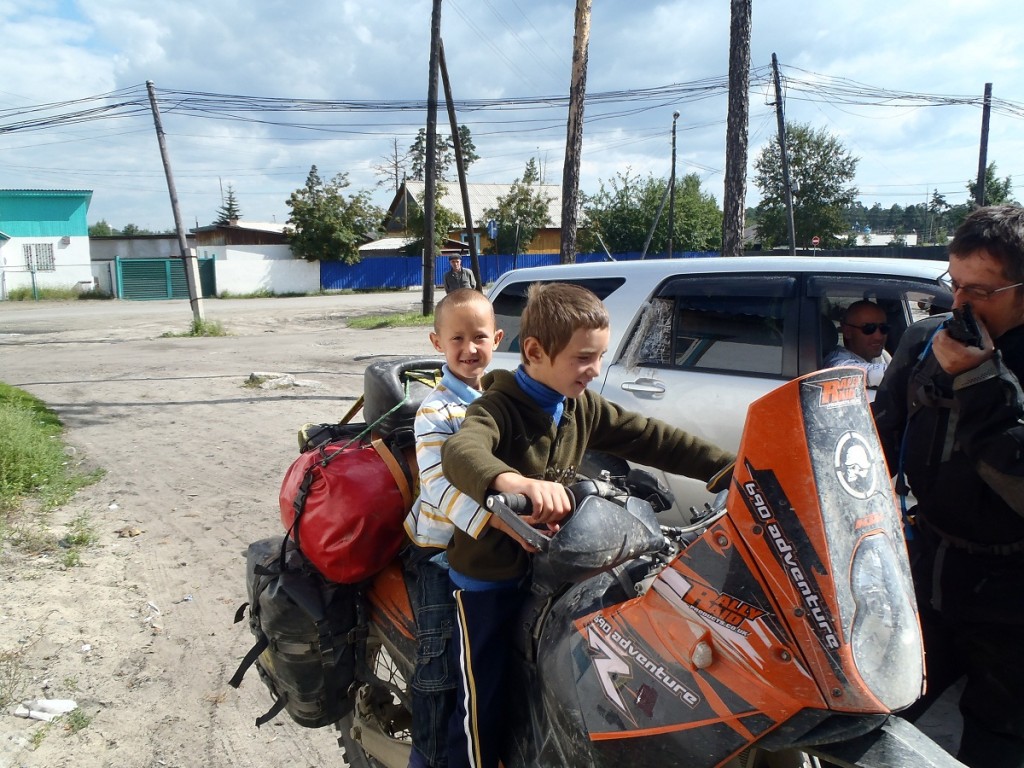 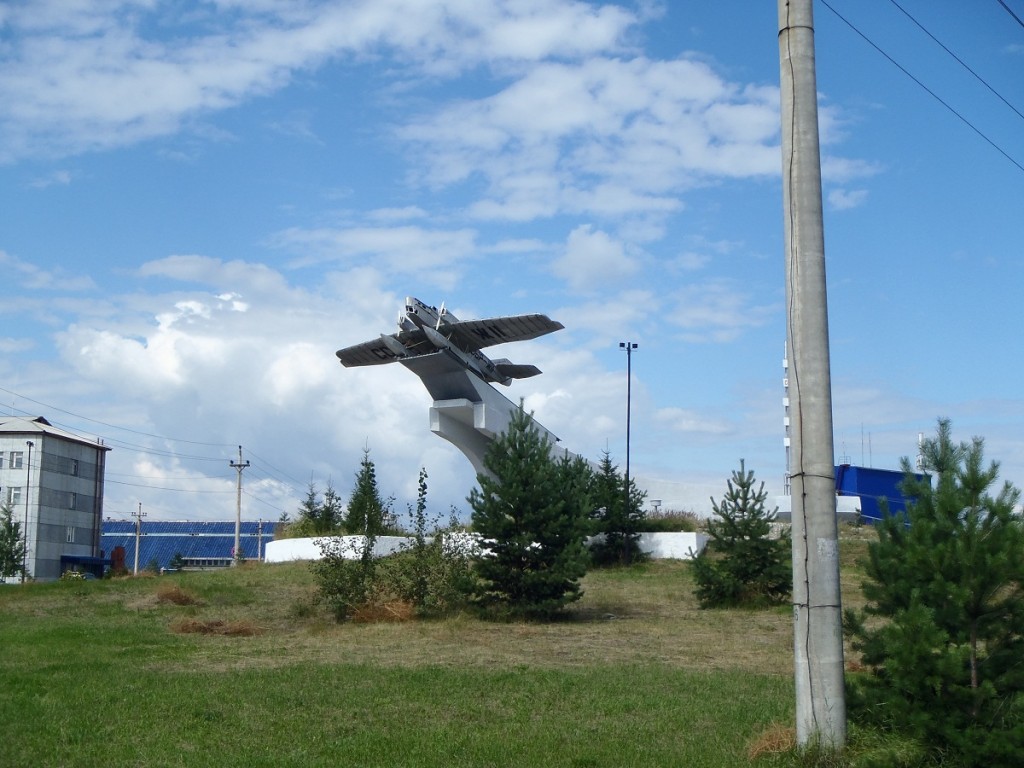 Another cafe lunch followed by re-provisioning of water, chocolate, crisps, bread, and jam we headed off hoping to make Severobaikalsk. The road from Taksimo was the same old bumpy, full of potholes, collapsed bridges, and some added truck corrugated ruts thrown in for good measure. 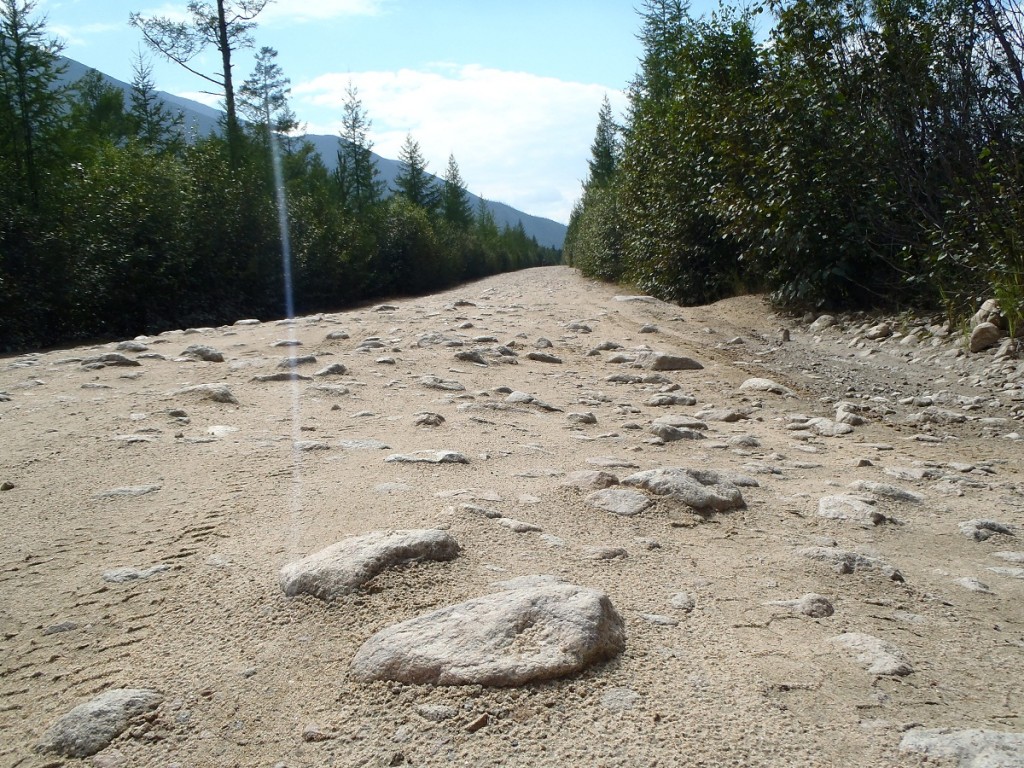 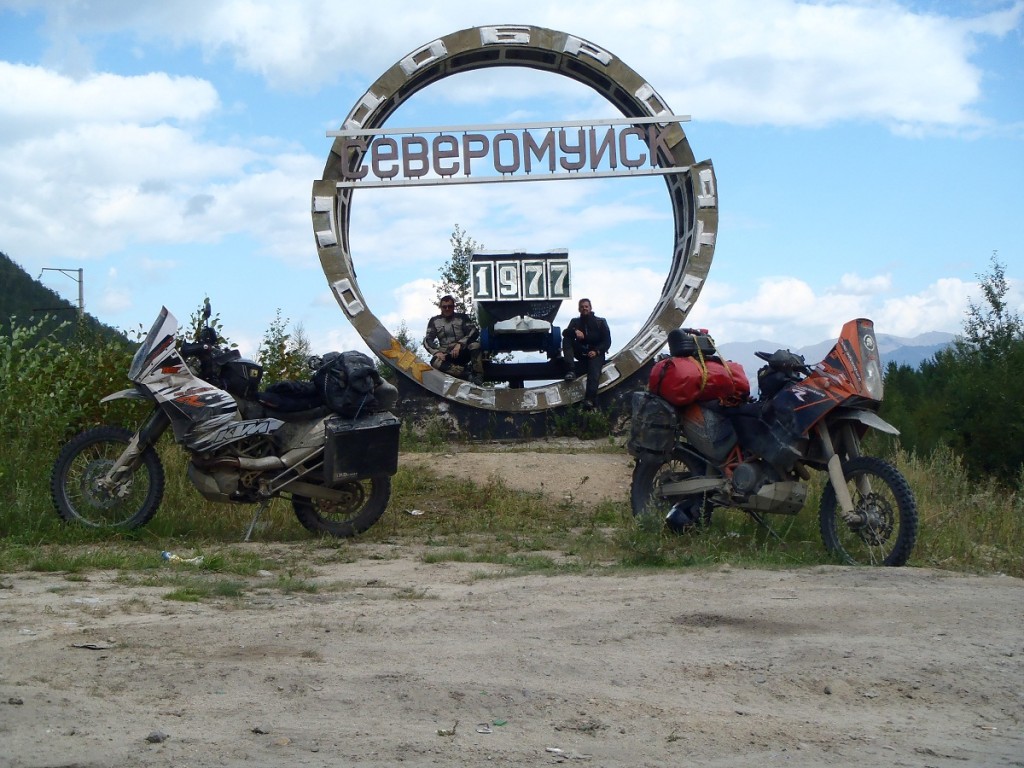 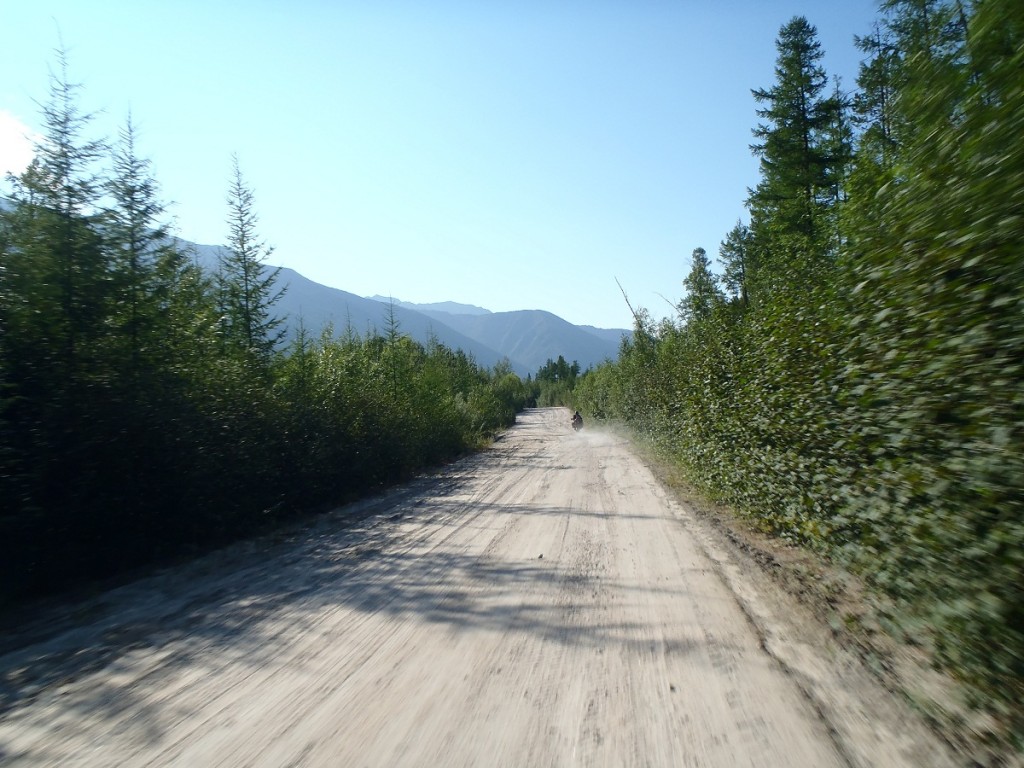 Not long after settting off past the last town/village we encountered another road block. This one was easier as we could manage to ride around the outside of it, still wonder if they were trying to stop cars from traveling the BAM. 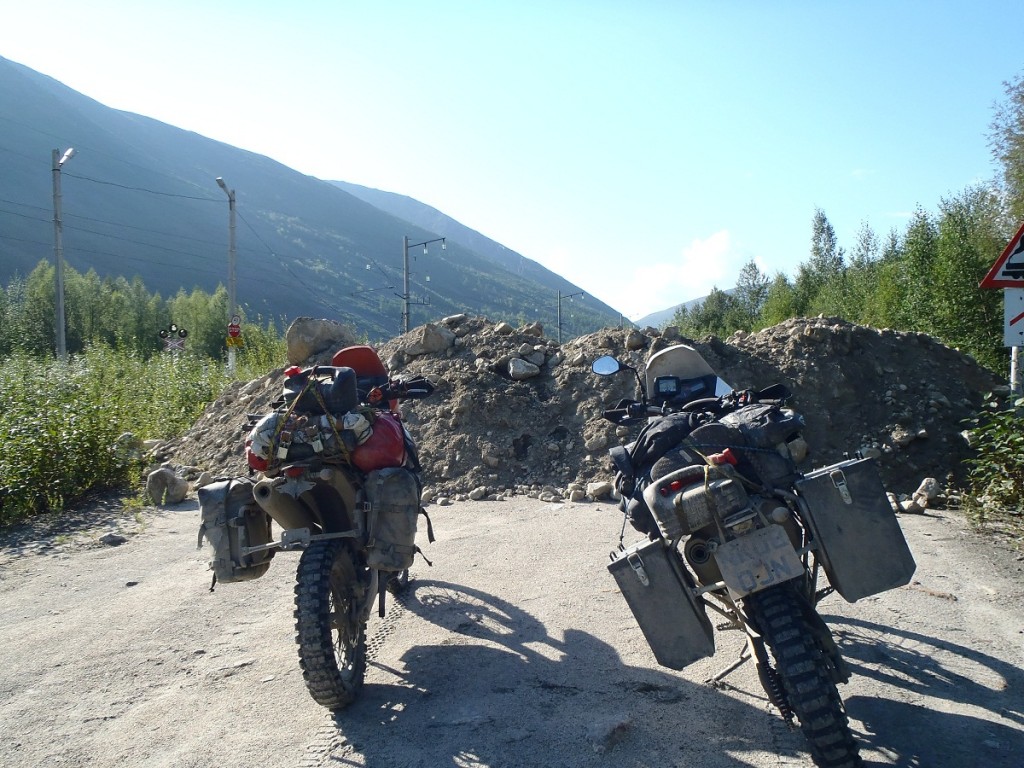 With one of the bridges looking a bit dodgy we decided to take the river crossing instead,  I dropped down to the track and started riding through. Maybe with all the crossings we had done I was getting complacent and caught one of the boulders which knocked me off balance and into the drink  I went! Quickly I stopped the engine and managed to get the bike upright, that’s one of the reasons we choose 690’s  is their weight. I picked it up pretty quick but still it struggled to start, when it did fire up a jet of water gushed from the exhaust (think Kev has it on video). 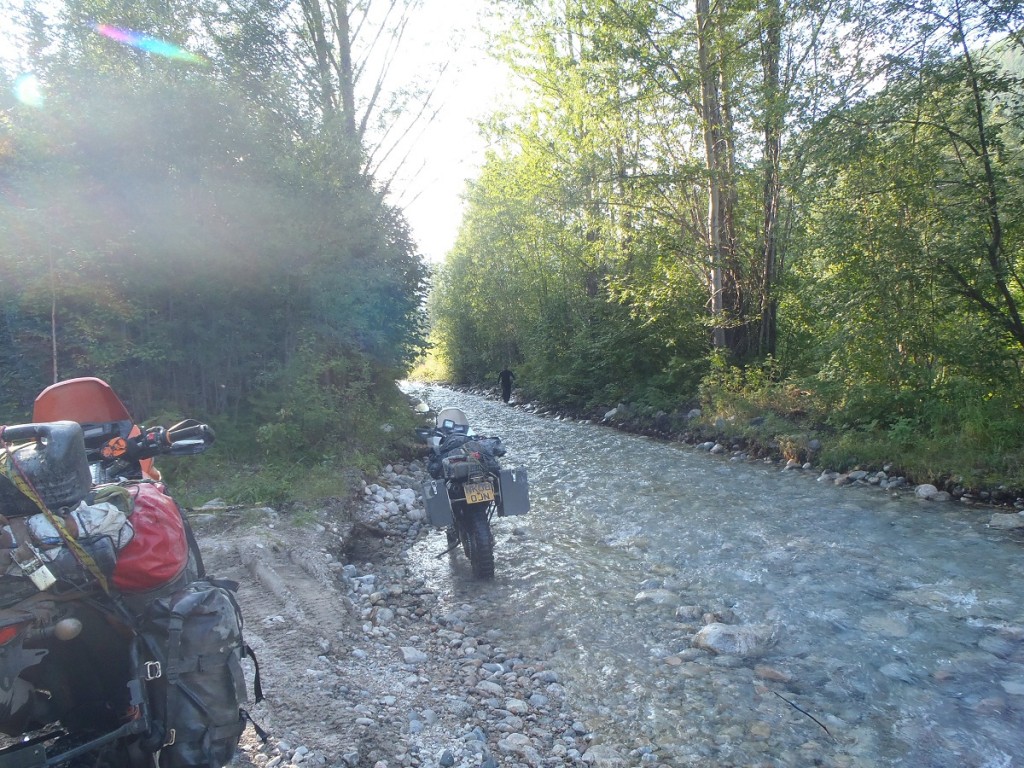 Soaked to the skin and still 80km’s to the nearest town / fuel stop we were hoping that there would be a B&B there so I could have a warm shower and a decent nights sleep. As luck would have it after asking a couple of men doing something by the side of the road (haven’t a clue what they were doing!) if there was a B&B they pointed us down a side road and told us it was on the right at the end next to a shop. 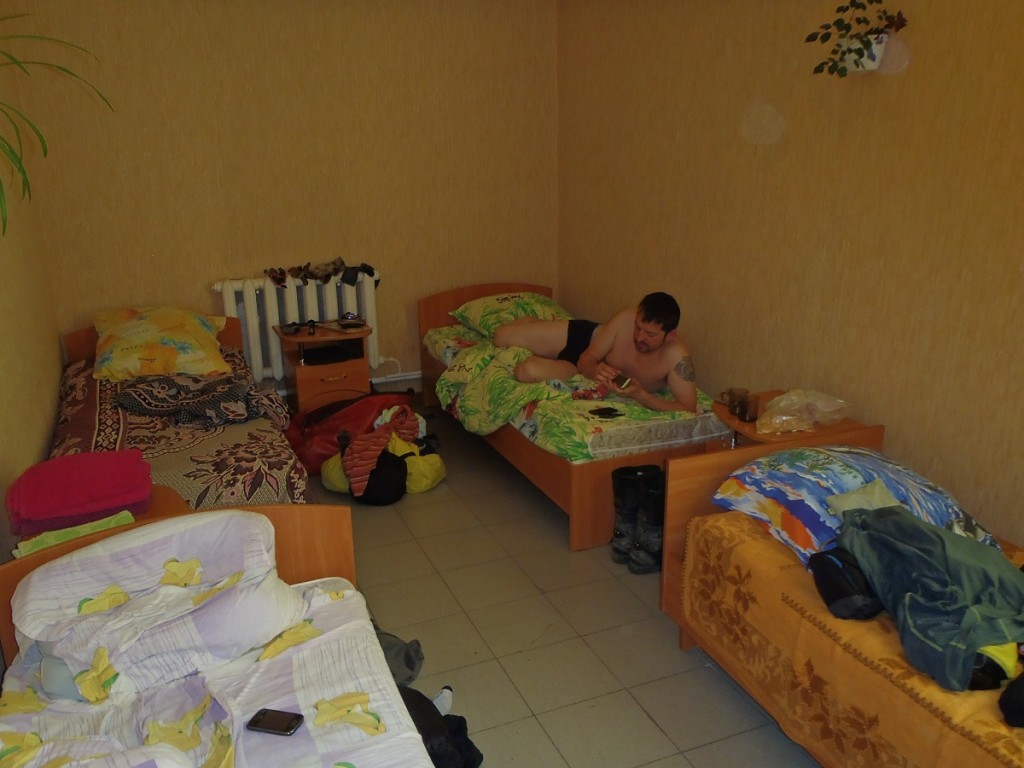 Another casualty of the trip today was my mobile, I had it tucked into a top pocket in my jacket that wasn’t water proof and it had got wet and fried itself 🙁 . This trip seems to be eating kit what we don’t loose or leave behind gets ruined by the constant vibrations or the dust, still at least the bikes are getting lighter!