Up bright and breezy this freezing cold morning built up the fire for a warm up and breakfast before setting off for Suseman which is the last fuel stop before the road of bones and Tomtor. 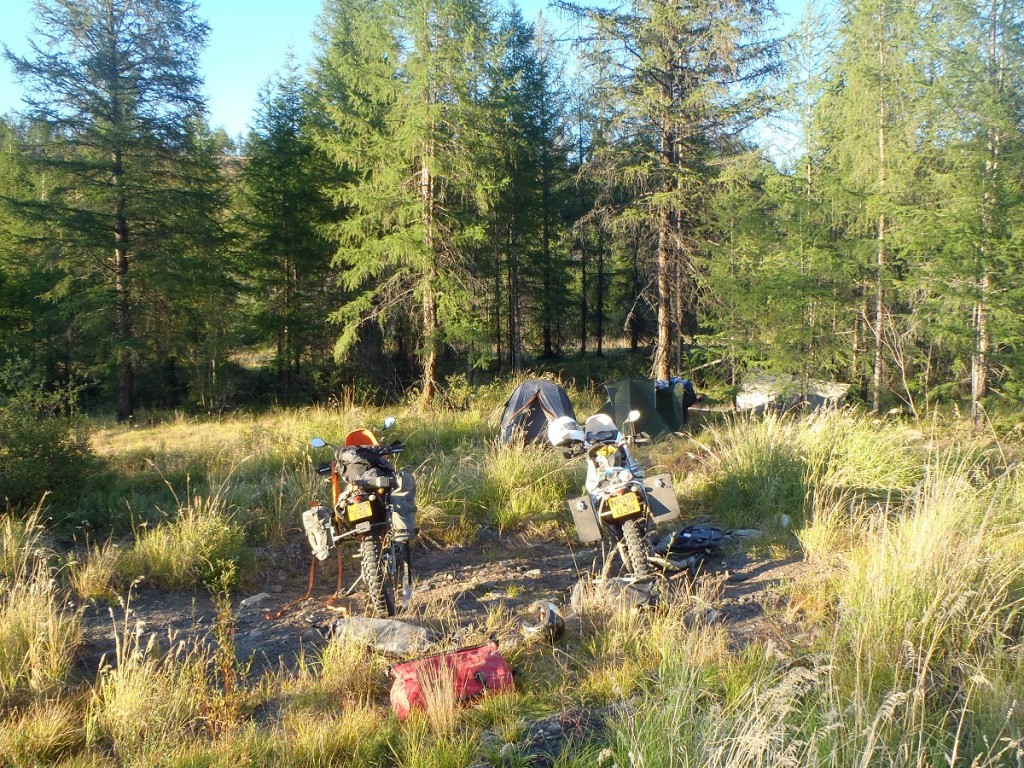 28th July and we have a thick frost in the morning!

About an hour into the ride my exhaust decided to set light to the indicator which burned through a strap causing the rear roll bag to drop onto the wheel! this caused it to lock up skidding the bike along at 50+mph on gravel is not much fun…

It’s a know issue with the 690 and should have altered the indicator location but didn’t bother, you live and learn! 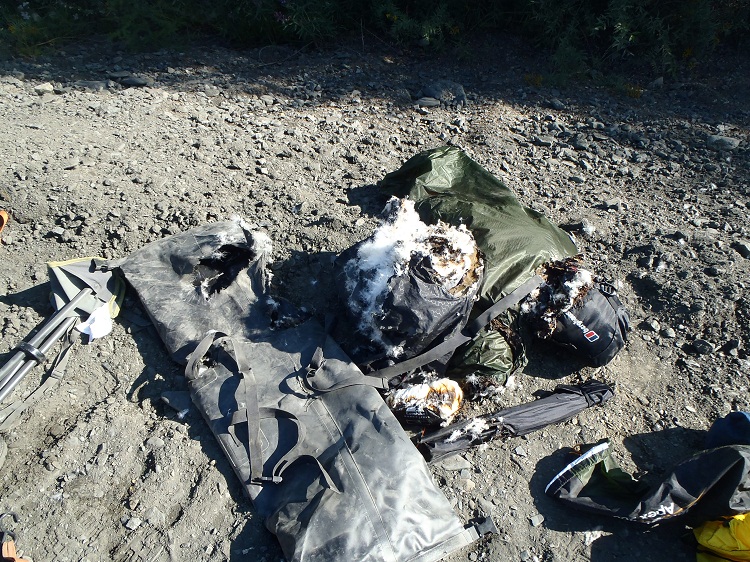 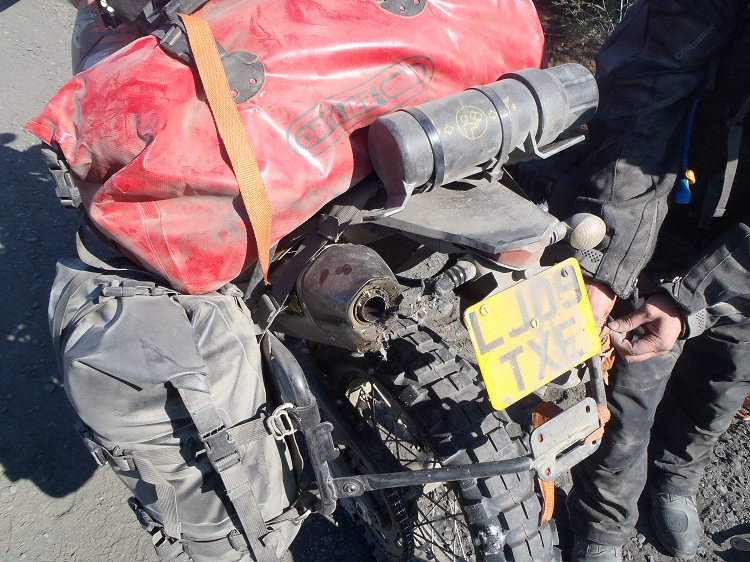 Once the remaining usable kit was repacked we headed off to Suseman for our final fuel stop before Tomtor. This is the last inhabited place for several hundred km’s until you reach Tomtor so stocking up on as much fuel as you can carry is imperative just in case! 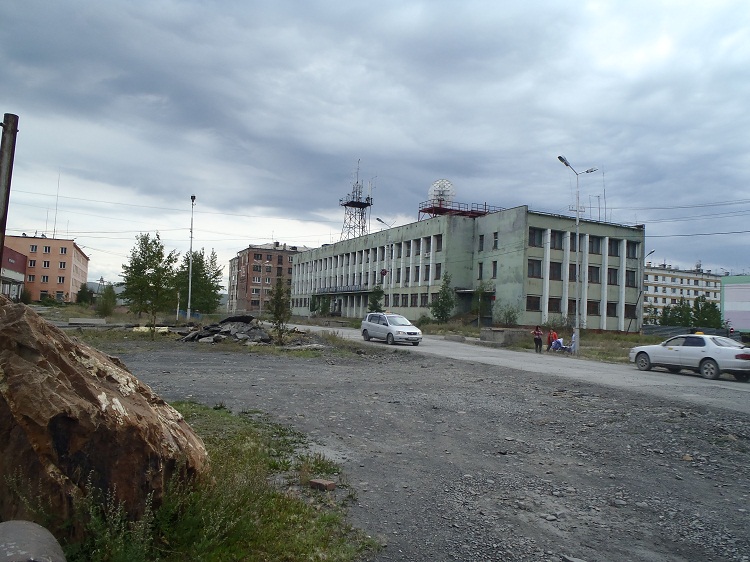 Suseman is very much a dead end town and getting there from the end of the Tenkinskaya Track meant going 40km in the wrong direction down the dustiest road we have ever ridden. The M56 is a compacted dirt rocky road and trying to pass the lorries that are throwing up the dust is seriously dangerous, you really cannot see a thing so your hitting rocks and gravel ridges with no warning as you overtake. 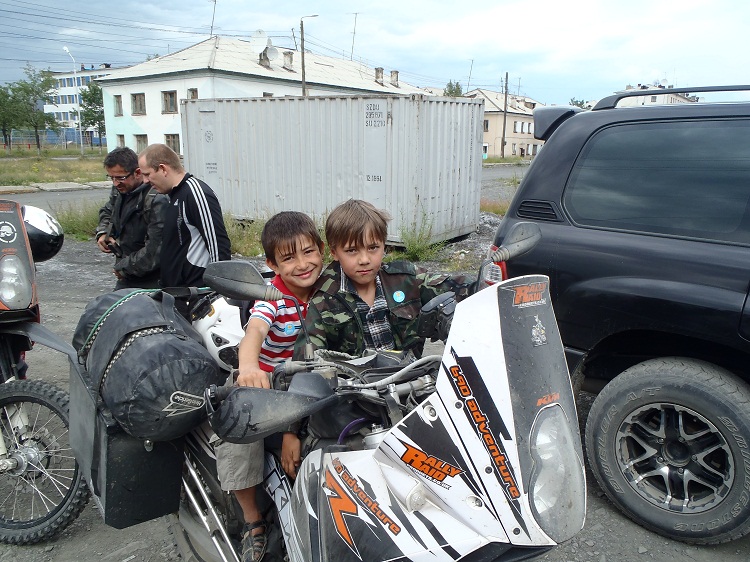 There is a cafe in Suseman where we had hoped to get something to eat but unfortunately it was closed so headed straight back out after stopping for fuel. Next stop Kadychan which is a deserted city that once housed 10000 plus people, the story goes that one day during the winter the heating broke so they all upped and left!

We finally left Magadan around 4 pm and headed out for Tenkinskaya Trakt, we probably should have stayed another night in Mag but were chomping at the bit now after waiting for the bikes for 3 days! 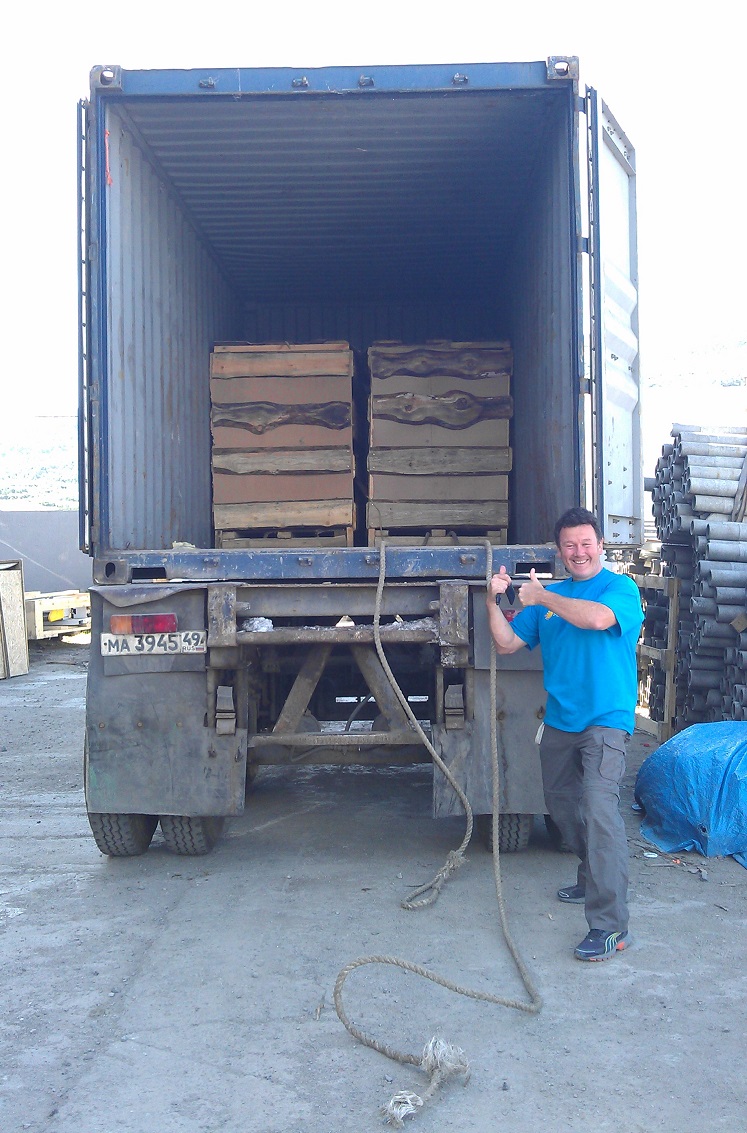 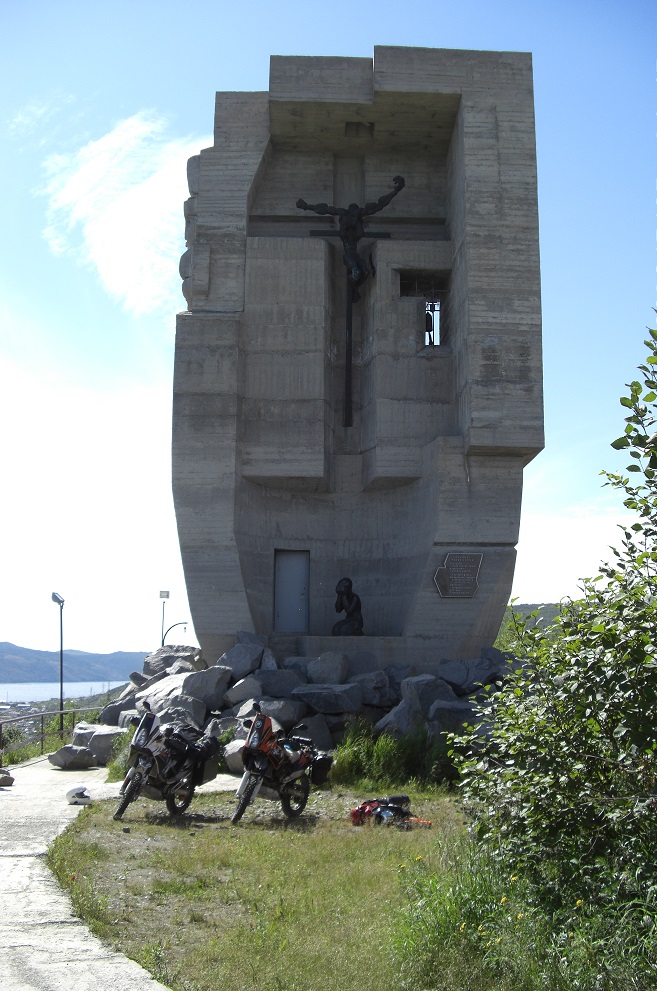 Mask of Sorrow from the back. 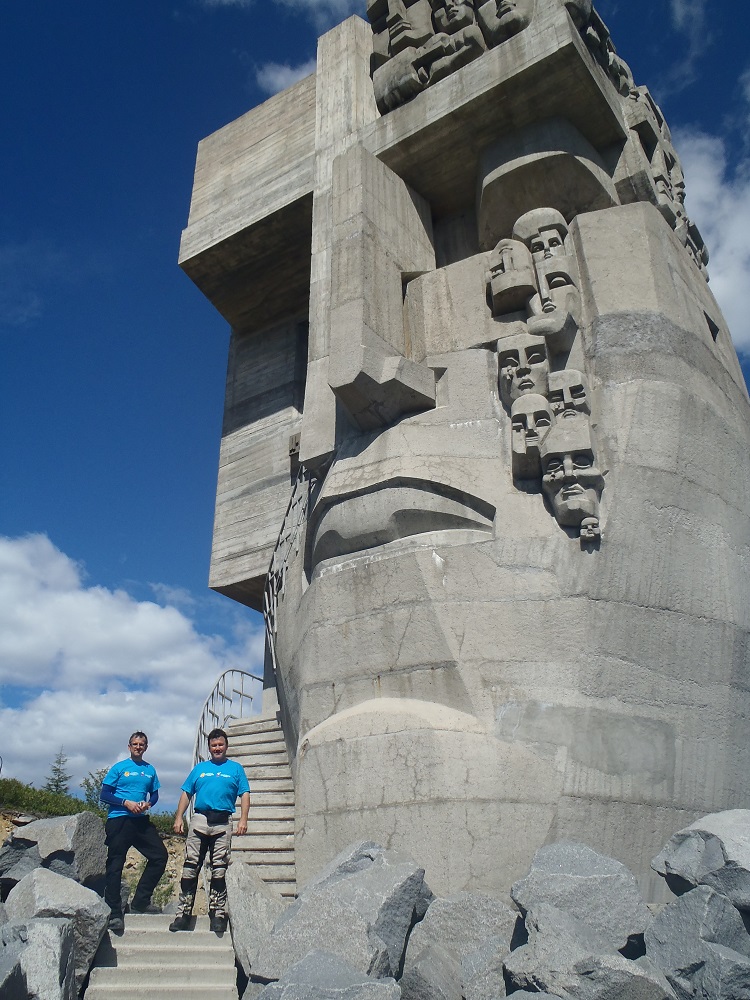 You can’t leave Magadan without a shot of the front.

We sat at the bottom of the mask of sorrow setting our sat navs when a guy on a cruiser came by and insisted on leading us out to the track, which was great except he only rode about 30 mph and we had about 40 miles to the start! 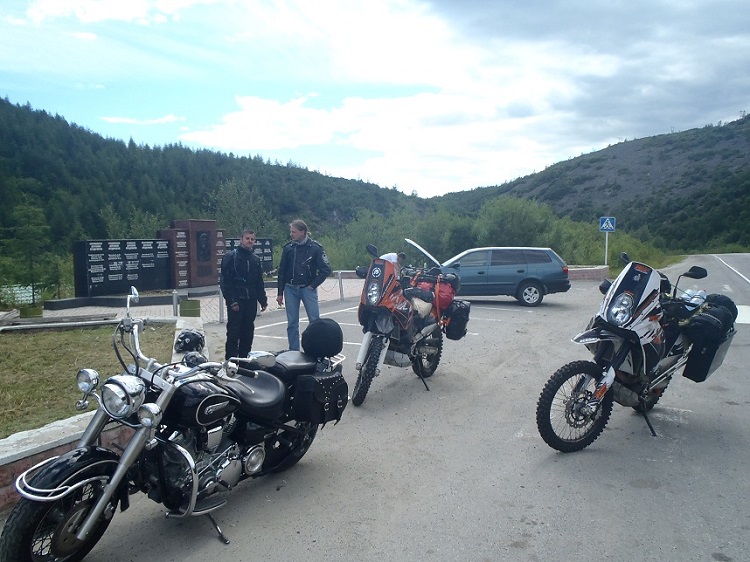 We rode the track for 2 hours or so before arriving at the fuel station at Ust-Omchug, its a small settlement not much there and within minutes we were surrounded by children.

After topping up our tanks we headed off for another hour before the light started to fade. 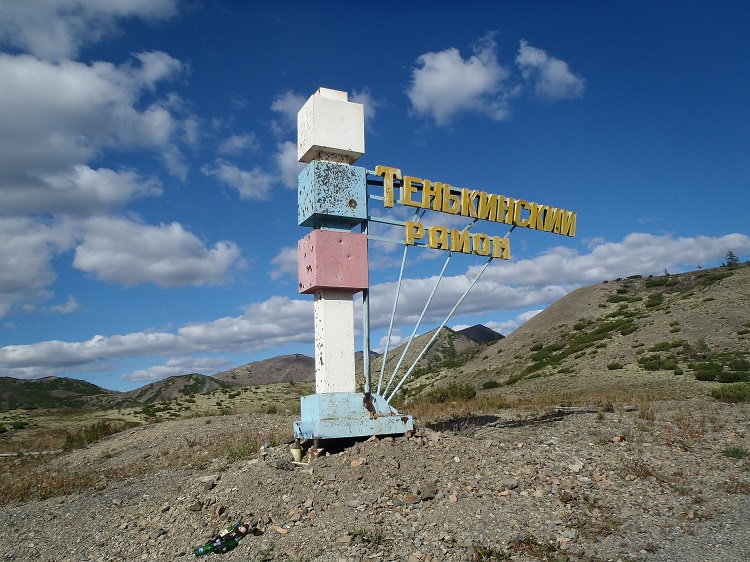 We found a little spot well in off the road and got the fire going for a brew. It was a lovely warm evening and we sat round the fire had a freeze dried meal which was actually not bad at all and chilled, the new morning was a different story with the fire gone out and thick frost over all the equipment we both woke freezing having been lowered into a false sense of security by the lovely evening before.

Oh dear, I can see a pattern forming after another messy night! Sat in a bar with Phil last night great guy and very interesting listening to what he has done so far, then we were joined by the local mafia who wanted us to sit and drink with them and that’s when it all went pear shaped! we were hoping for an early night after the last one.

The thing is that there is not a lot else to do here but go for a pint, or drink vodka! 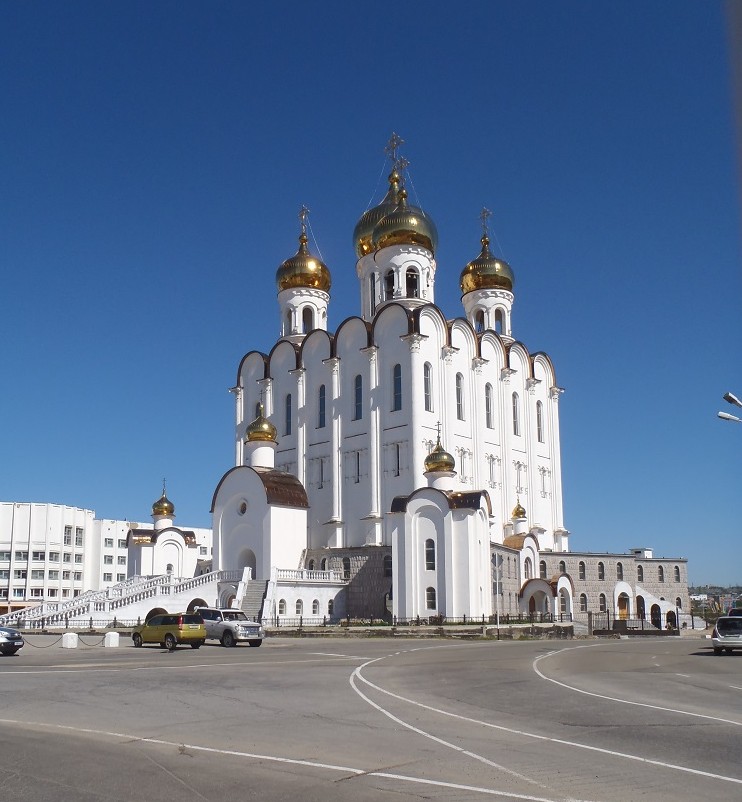 Magadan Church in the centre.

Went for a walk today and came across the Kudo support truck so looked around for the group and found them in a nearby hotel, they arrived late last night after a London to Magadan trip with 4 customers we are going to meet them for a pint tonight seemed like nice chaps and also have all the info on our route. 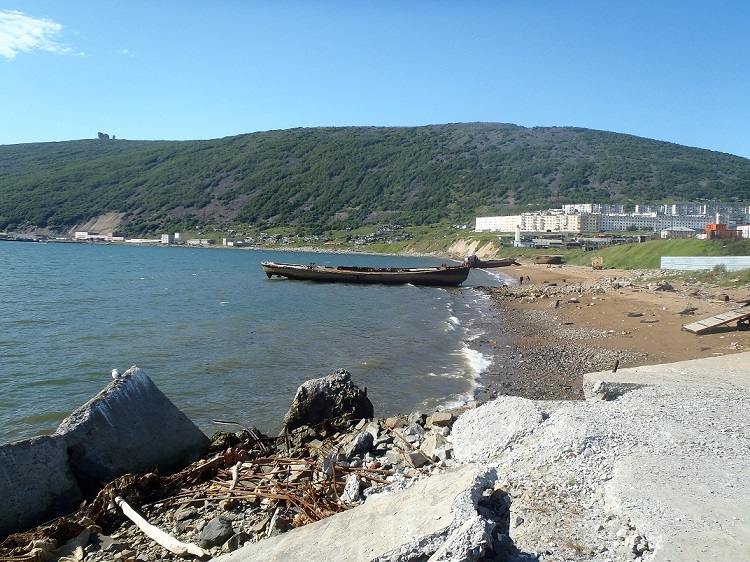 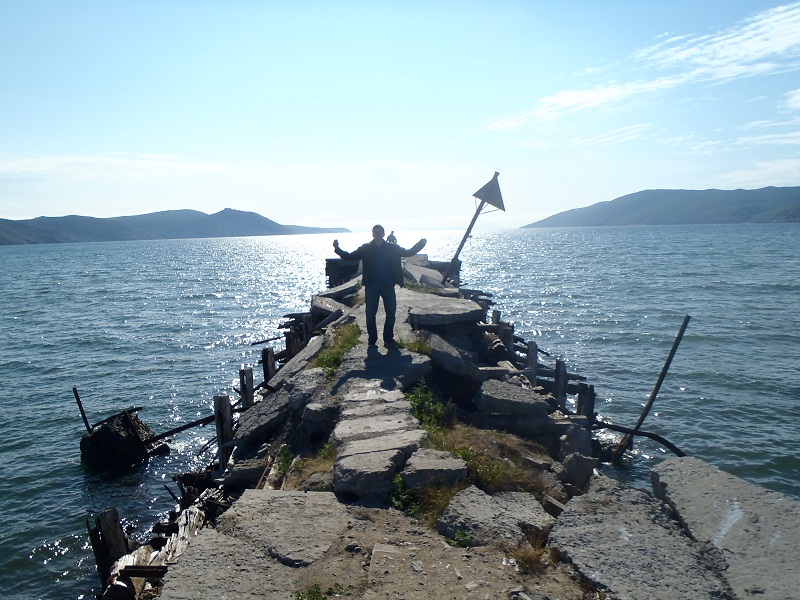 Yes Magadan does have a Pier!! 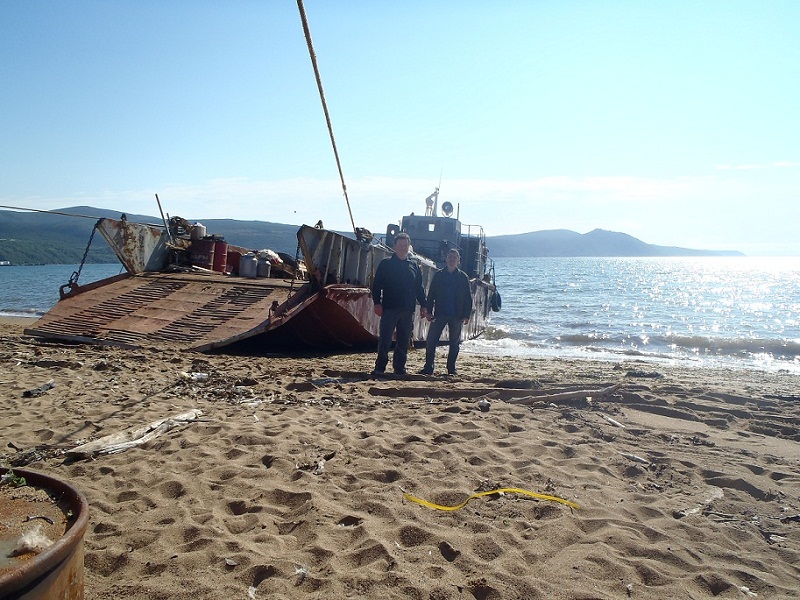 Old landing craft beached, someone was living on this..

A bit of a wasted day as we sat drinking with an American, Australian, Russian and a Czech that we met in the steak house last night, was a bit of a session to say the least and Kev didn’t get out of bed until 8pm the next day! The Russian vodka measures are a bit much! 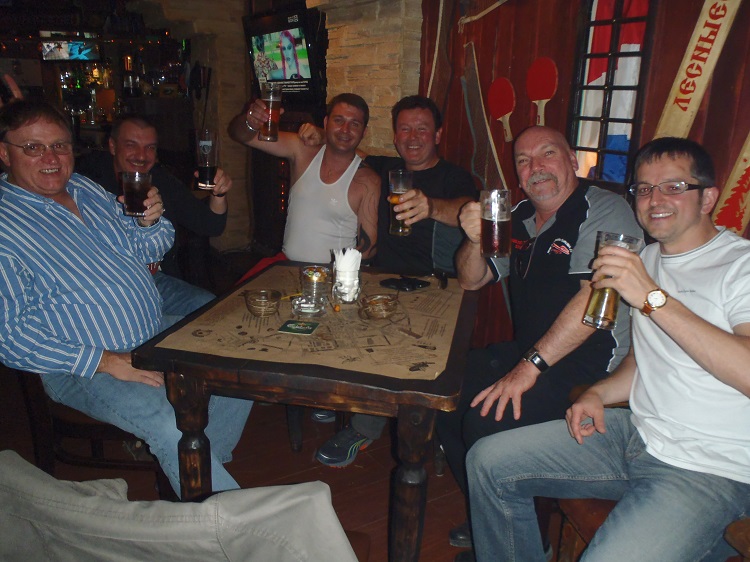 Beers in the Steak House.

We met a guy Phil (triumphil on the HUBB) who is doing a round the word trip on a triumph tiger, unfortunately the bike has had it so he plans to fly to Anchorage and buy a new bike there to carry on his trip. We are meeting Phil soon for a beer and to hopefully pick his brains on the road conditions ahead of us. 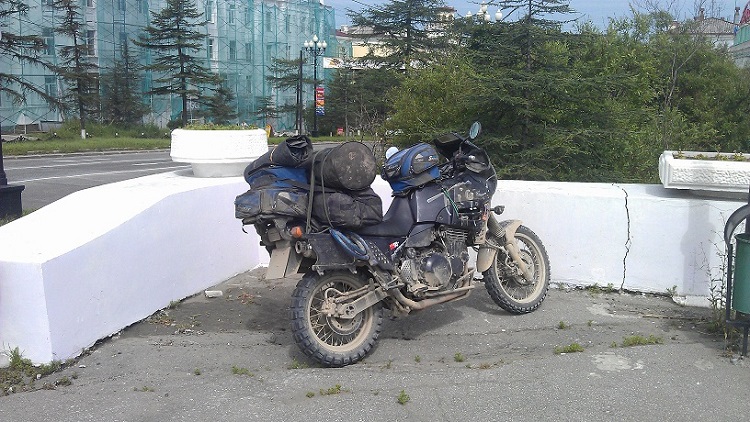 Today we woke at 4am which was a bit of a combination of jet lag and a friend phoning Kev and waking the whole block of flats, we went for a stroll to see if we could find milk for tea but none of the supermarkets open until 10am. 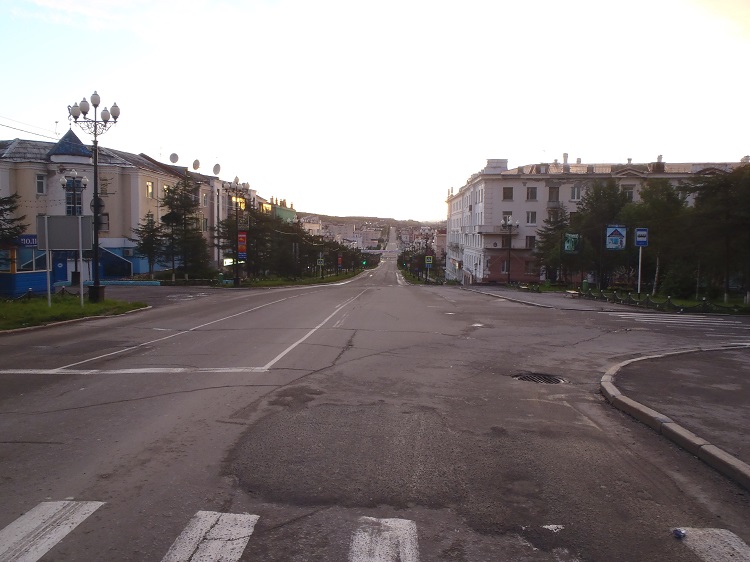 Not much action at 6am! 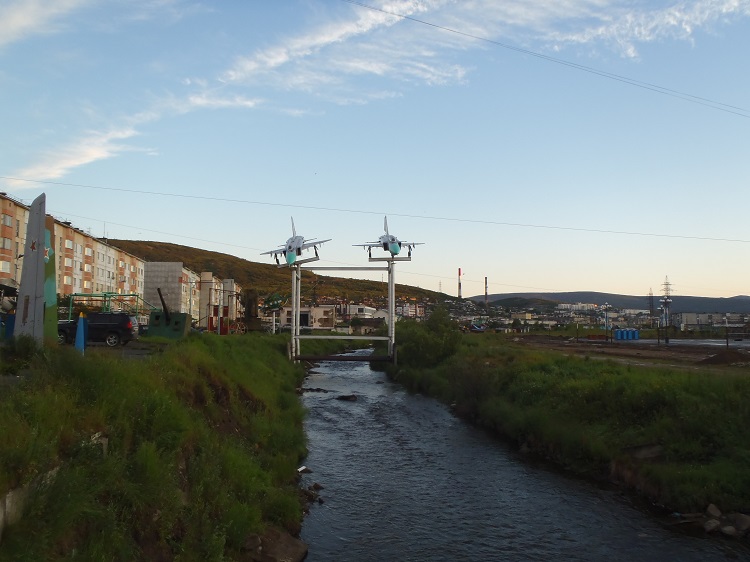 Remnants of the Soviet Union. 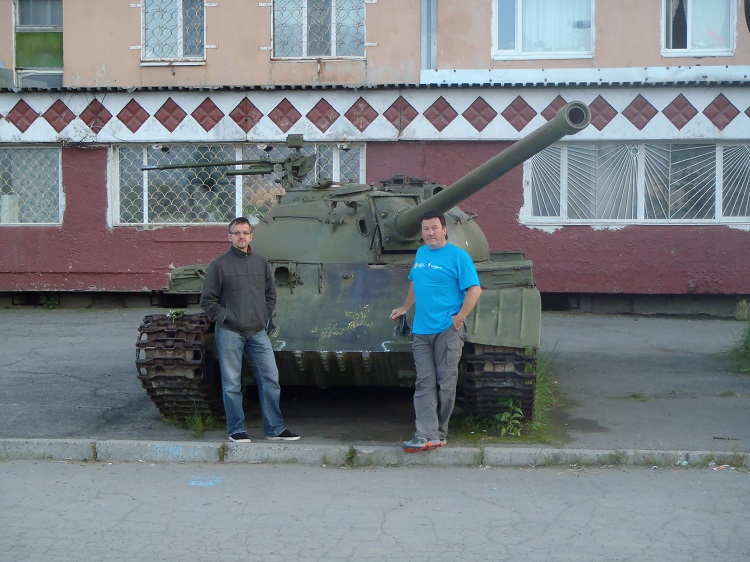 Luckily for us there was a bar that hadn’t closed yet so was able to sit drink tea (no really that’s all we drank) and eat peanuts. The bar was quite full for that time of the morning with a drunk couples in, will have to try and avoid that place if we go for a beer any time this week as Kev couldn’t handle a session like that!

We headed back to the apartment for a bit of breakfast around 7 am after getting refused more tea in the bar ( Kev was getting a bit lairy must have been the caffeine ) the bar was closing, at 7 am!
Around 10am we took a stroll down to the shipping agent to find out about our bikes, we knew the ship was in yesterday and they may take 2 days to get unloaded but when we finally found the company we were told the bikes would not be ready until Friday after 4pm! Bugger!!!! Back to the all night bar then!
We will have to find something to do tomorrow but it doesn’t look promising, today we walked all around the town but found nothing! On a plus side the sun has been out all day though the wind is bitterly cold it’s still much nicer than yesterday.

Arrived in Magadan this morning at 11:45 after an 8 hour flight from Moscow, the flight was strange as we had asked to move to the rear of the plane as it was almost empty. Big mistake as they started moving all the drunk passengers to the rear during the flight and we had two rather drunk men behind us moving and moaning during the night! weird… 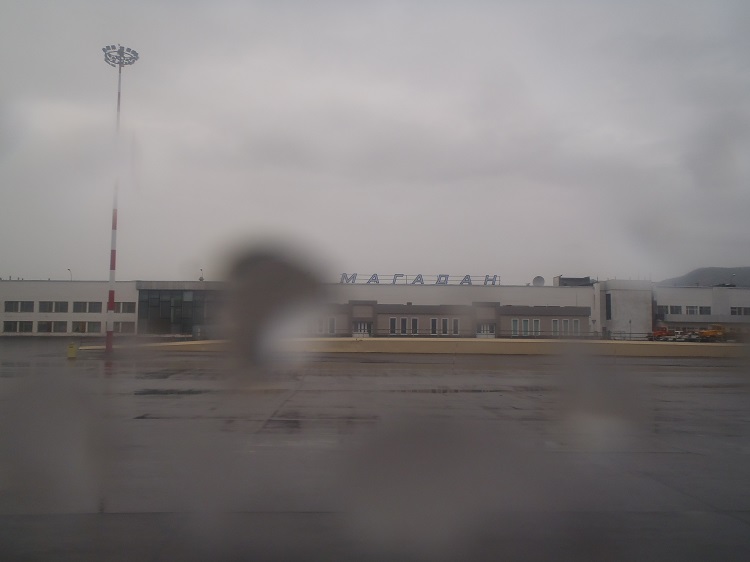 Arriving at Sokol airport the rain was tipping it down and it was miserably cold (a sign of things to come maybe??). 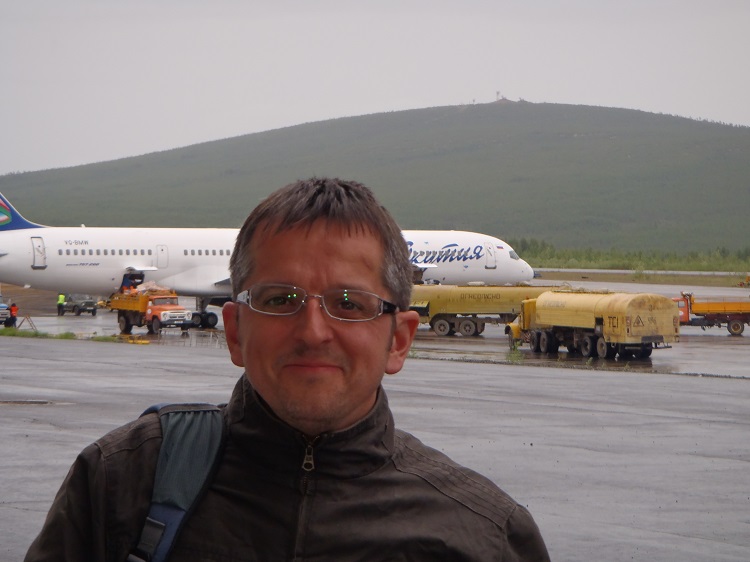 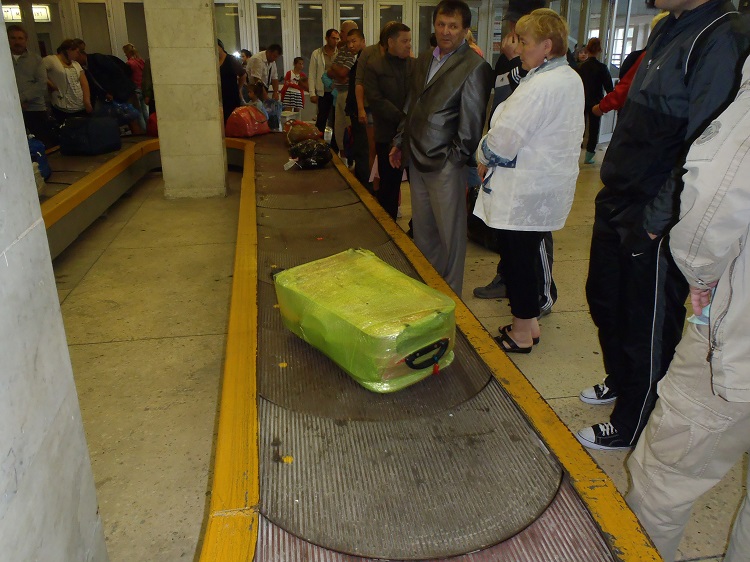 There is a bus that takes you the 40km or so into Magadan for about £2, just about 3 or 4 km outside the city was the old airport with rotting planes and helicopters on the runway, makes you wonder why they moved the new one so far away.

When we arrived at the bus station we were met by Vita and Alexander our landlords for the next couple of nights, they took us to get sim cards for our phones and sorted our registration for Russian immigration.
Next was a drive around tour of Magadan which lasted about 15 minutes!, then up to the Mask of Sorrow (Skorbi).

The apartment was very basic with no curtains on the windows (which didn’t help with the sleeping) but did the trick and is much cheaper than the hotels here.
We sat up until midnight messing with sat navs and planning routes etc getting very excited about picking up the bikes in the next day or two. 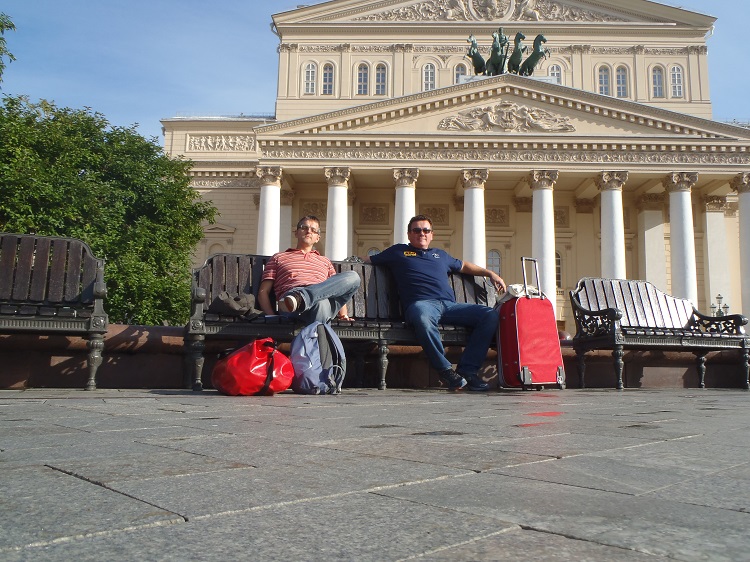 Day 1 of the adventure….
Excitement reaching fever pitch now, I flew to Dublin from Gatwick arriving at 15.30 as it was a good bit cheaper to fly from Dublin to Moscow/Magadan then London to Moscow/Magadan go figure!. Kev picked me up from the airport and we headed off to his house for a bite to eat before the flight out at 11pm. 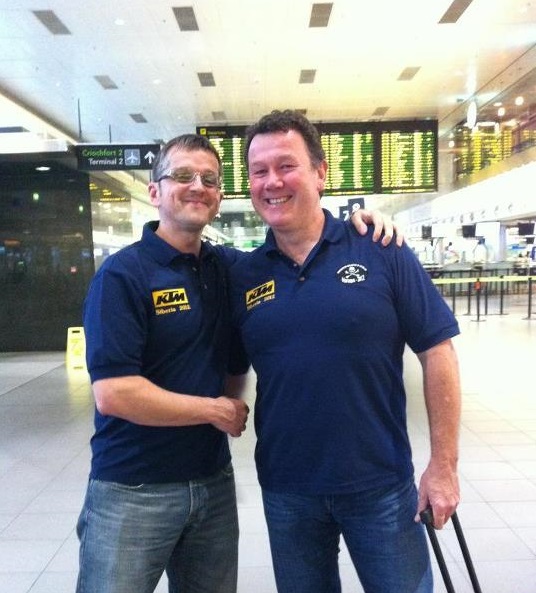